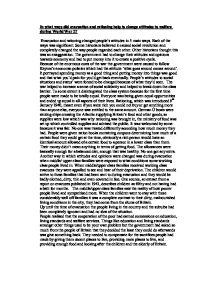 In what ways did evacuation and rationing help to change attitudes to welfare during World War 2?

In what ways did evacuation and rationing help to change attitudes to welfare during World War 2? Evacuation and rationing changed people's attitudes in 5 main ways. Each of the ways was significant. Some historians believed it caused social revolution and completely changed the way people regarded each other. Other historians thought this was an exaggeration. The government had to change their attitudes and opinions towards economy and had to put money into it to create a positive cycle. Because of the enormous costs of the war the government were caused to follow Keynes's economic policies which had the attitude 'what goes around comes around'. It portrayed spending money as a good thing and putting money into things was good and that what you'd pain for you'd get back eventually. People's attitudes to social situations and status' were forced to be changed because of what they'd seen. ...read more.

Their money didn't mean anything in terms of getting food. The allowances were basically enough for a balanced diet, enough that was healthy. No one got any extra. Another way in which attitudes and opinions were changed was during evacuation when middle/ upper class families were exposed to what conditions some working class people lived in. When middle/upper class families received working class evacuees they were appalled to see and hear of their deprivation. The children would arrive to these families that had been sent to during evacuation and they would be badly clothed, dirty, thin and even covered in lice. One source, an extract from a report on evacuees published in 1941, describes children as filthy and not having had a bath for months. The middle/upper class families saw the reality of how poorer people lived and sympathised more. When the children went to stay with these considerably well off families it was a complete contrast to their dirty, malnourished living conditions in the city, they had come from the slums of Britain. ...read more.

Without the poor the war would not have worked. For example all the people that worked hard in the factories that made things like ammunition, they were of working class. Rationing and evacuation were a form of welfare and it helped people to accept being told what to do and to have their affairs dealt with by the government. The public got used to being told what to do and saw it as a good thing. As a result of the government telling them what to do the people of Britain were evacuated which meant they were kept safe and looked after. Also when having their diet controlled by the government when rationing was in effect many people had much more of a balanced diet and were better fed than ever before. People saw that if the government were given control over certain things life was much better for them. So overall the processes of evacuation and introduction of rationing helped changed the attitudes of the people of Britain and the government significantly and to an extent there was a social revolution ...read more.