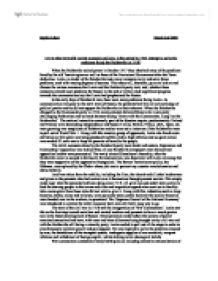 In what ways did Lenin's economic policies, in the period to 1924, attempt to solve the problems facing the Bolsheviks in 1918?

Sophie Lakes March 2nd 2005 (A) In what ways did Lenin's economic policies, in the period to 1924, attempt to solve the problems facing the Bolsheviks in 1918? When the Bolsheviks seized power in October 1917 they inherited many of the problems faced by the old Tsarist regime as well as those of the Provisional Government after the Tsars abdication. Lenin, as leader of the Bolsheviks took many measures to try and solve these problems, each with varying degrees of success. This essay will, therefore, go on to look at and discuss the various measures that Lenin and the Bolshevik party took, and, whether these measures created more problems for Russia in the end or in fact made significant progress towards the communist society that Lenin had prophesised for Russia. In the early days of Bolshevik rule, there were many problems facing Lenin. As communication was poor to the rural areas of Russia, the peasants had little or no knowledge of political parties and so did not support the Bolsheviks in their takeover. When the Bolsheviks changed to the Communist party in 1918, many peasants believed these to be a new party challenging Bolshevism and so made banners saying 'Down with the Communists, Long live the Bolsheviks!' ...read more.

Land was taken from the nobility, including the Tsar, the church and all other landowners and given to the peasants who had control over it themselves through peasant soviets. This simply made legal what the peasants had been doing since 1916. All grain was put under state control to feed the starving people in the towns and cities and requisition squads were sent out to forcibly take excess grain from those who did not wish to give it. Along with this, industries such as large factories, banks, mines and railways, were put under state control however the smaller factories were handed over to the workers, as promised. The 'Supreme Council of the National Economy' was introduced to oversee the entire economy but Lenin still had a long way to go. The start of the civil war in 1918 saw the inauguration of 'War Communism'. Lenin saw this as the first step toward socialism and wanted workers and peasants to have a much greater role in the future development of Russia. Many promises made before the seizure of power remained unresolved and now, with more and more dilemmas being brought on by civil war and with ...read more.

With this policy, Lenin was trying to boost the production in towns, cities and the countryside and so the abhorrent practise of grain requisitioning was ended. Instead of this, peasants were able to sell grain for a profit, giving 10% of this in tax to the government. Although the larger factories remained under state control, smaller factories were returned back to private ownership and the militaristic rule over factories was stopped. Money was reinstated and anyone could set up a shop and sell or hire goods for a profit. Lenin remained adamant that this was not a permanent back track to capitalism, it was a temporary measure, and once the economy picked up the NEP would be eradicated. The NEP's results were unexpected. The starvation in the towns and cities, which had driven some to cannibalism, was over and life began to flow back into the cities. Grain became so readily available that the prices dropped, causing more unwillingness to sell grain. The government responded by bringing prices down on industrial goods to balance the problem. The NEP appeared to be the answer to all of Russia's problems but Lenin insisted that communism was not dead, it was simply on hold. ?? ?? ?? ?? ...read more.