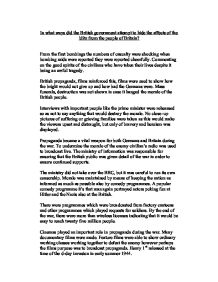 In what ways did the British government attempt to hide the affects of the blitz from the people of Britain?

In what ways did the British government attempt to hide the affects of the blitz from the people of Britain? From the first bombings the numbers of casualty were shocking when bombing raids were reported they were reported cheerfully. Commenting on the good spirits of the civilians who have taken their lives despite it being an awful tragedy. British propaganda, films reinforced this, films were used to show how the bright would not give up and how bad the Germans were. Mass funerals, destruction was not shown in case it hanged the morale of the British people. ...read more.

To undermine the morale of the enemy civilian's radio was used to broadcast live. The ministry of information was responsible for ensuring that the British public was given detail of the war in order to ensure continued supports. The ministry did not take over the BBC, but it was careful to run its own censorship. Morale was maintained by means of keeping the nation as informed as much as possible also by comedy programmes. A popular comedy programme it's that man again portrayed actors poking fun at Hitler and the Nazis also at the British. ...read more.

People who were going to be useful to the enemy were not allowed to be interviewed by the tabloids. Where ever civilians walked they could see encouraging posters to win the war. The use of posters was wide spread and the best ones were the ones which had a sense of feeling that people can work together. The government was careful to plan what the public saw. There were no pictures of the looting that took place in Coventry after the bombing raid and the deaths of children of Catford School nor was there any report of the 17 people killed when a panic stricken crowd were pushed into the Bethnal green tube station. ...read more.