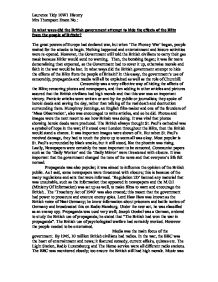 Paul's surrounded by black smoke, but it still stood, like the phoenix was rising. Lastly, Newspapers were certainly the most important to be censored. Communist papers such as the 'Daily Worker' and the 'Daily Mirror' were threatened with closure. It was important that the government changed the tone of the news and that everyone's life felt normal. Propaganda was also popular; it was aimed to influence the opinion of the British public. As I said, some newspapers were threatened with closure; this is because of the many regulations and acts that were informed. 'Regulation 2D' banned any material that was unsuitable, such as the information that appeared in newspapers and the M.O.I (Ministry Of Information) was set up as well, to make films to warn and encourage the British.. The 'Treachery Act of 1940' was also created; this meant that the government had power to prosecute and execute enemy spies. ...read more.

'In Which We Serve' was produced by Noel Coward did involve death and grief, however one woman did write in to say it helped her get over her husband's death. Giving the people good media raised the morale but not as much as one man. 'We must not let our peoples lose their morale. We must not under any circumstances allow them to admit defeat". Winston Churchill was inspirational, and in this speech, he sums up the governments role. His speeches raised morale, motivated and encouraged people; he was even referred to as 'Winnie' at one time by the East Enders. They knew with him, they'd be safe. To summarise, the attempt to hide the effects of the Blitz was successful, and the government knew what to cover up and did it well. Joseph Goebel was certainly right; we had definitely won the war in psychological warfare, and we did it with style. Laurence Tidy 10W1 History Mrs Thompson Exam No.: ...read more.