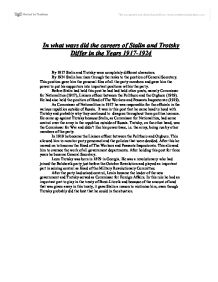 In what ways did the careers of Stalin and Trotsky Differ in the Years 1917-1924?

In what ways did the careers of Stalin and Trotsky Differ in the Years 1917-1924 By 1917 Stalin and Trotsky were completely different characters. By 1924 Stalin has risen through the ranks to the position of General Secretary. This position gave him the personal files of all the party members and gave him the power to put his supporters into important positions within the party. Before Stalin had held this post he had had held other posts, namely Commissar for Nationalities (1917), Liaison officer between the Politburo and the Orgburo (1919). ...read more.

It was in this post that he came head to head with Trotsky and probably why they continued to disagree throughout there political careers. He came up against Trotsky because Stalin, as Commissar for Nationalities, had some control over the army in the republics outside of Russia. Trotsky, on the other hand, was the Commissar for War and didn't like his power base, i.e. the army, being run by other members of the party. ...read more.

He was a revolutionary who had joined the Bolshevik party just before the October Revolution and played an important part in seizing control as Head of the Military Revolutionary Committee. After the party had seized control, Lenin became the leader of the new government and Trotsky served as Commissar for Foreign Affairs. In this role he had an important part to play in the treaty of Brest-Litovik and because of the amount of land that was given away in this treaty, it gave Stalin a reason to victimise him, even though Trotsky probably did the best that he could in the situation. ...read more.