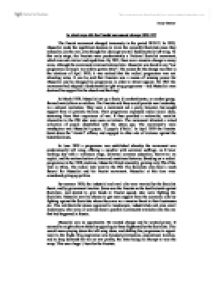 In what ways did the Fascist movement change 1919-21? The Fascist movement changed immensely in the period 1919-21. In 1919, Mussolini made the significant decision to leave the cowardly Socialists since they refused to join the war, even though his ideology was still fundamentally left wing. At this early stage, the Fascists were predominantly a National Socialist movement, which was anti-clerical and republican. By 1921, there was a massive change in many areas, although the movement remained nationalistic. Mussolini was heard to say "our programme is simple: we wish to govern Italy". The reason for the change was that in the elections of April 1919, it was noticed that the radical programme was not attracting votes. It can be said that Fascism was a means of winning power for Mussolini and he changed his programme in order to attract support. By 1921 the movement had adopted a fundamentally right wing programme - and Mussolini even declared his support for the church and the king! In March 1919, Mussolini set up a fascio di combattimento, or combat group, formed mainly from ex-soldiers. ...read more.

Some saw the Fascists as the best bulwark against Socialism, and started to give funds to Fascist squads who were fighting the Socialists. Mussolini saw his chance to get more support from the economic elite by fighting against the Socialists whom they saw as a massive threat to their businesses etc. This anti-Socialist stance appealed to landowners, industrialists and even small landowners, who were all worried about a possible Communist revolution like the one that had happened in Russia. Mussolini saw an opportunity. He wanted change and he wanted power. It seemed he might achieve these by appealing to those frightened by the Socialists. This would mean playing down his left-wing ideas, and shifting his programme to appeal more to the Right. His programme now boasted privatisation, proportional taxation, and to drop demands for tax on war profits; the latter being an attempt to woo the army. This was a huge U turn for the Fascists. In late 1920 Fascism took off, especially in the rural areas in North and Central Italy. Local leaders, or ras, set up their own squads of Fascists. ...read more.

On 2nd August 1921, he signed a 'Pact of Pacification' with the Socialists. Ras pressure forced him to back down. One of the most substantial moves for Mussolini was that in November 1921, he formed the National Fascist Party, which acknowledged the role of the squads but recognised Mussolini as the indispensable Duce. Not only did this mean that Mussolini had full power over the new party, but it also meant that all of the Fascist members were more organised, and that people took them more seriously as a group. To get more power, Mussolini also realised that he had to make himself and the party more respectable, so as to appeal to the elite and bourgeoisie. He also decided that he would no longer be anti-clerical and anti-monarchy, as he wanted the votes of the Catholics and those who were pro-monarchy. In conclusion, by 1921 Mussolini had dropped his radical left-wing ideas in order to try and attract a more varied range of supporters from the elite, and therefore he changed his ideology to suit them. He was also trying to gain power legally, much to the annoyance of the ras, and learnt that in order to be successful in government, he needed to present a more acceptable face of Fascism. Emily Gardner ...read more.