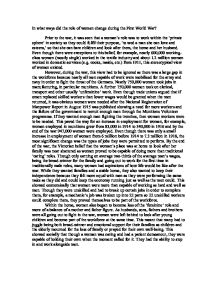 In what ways did the role of women change during the First World War?

In what ways did the role of women change during the First World War? Prior to the war, it was seen that a woman's role was to work within the 'private sphere' in society so they could fulfil their purpose, 'to wed a man she can love and esteem,' so that she can bare children and look after them, the home and her husband. Even though there were exceptions to this belief, for example, nearly 600,000 working-class women (mostly single) worked in the textile industry and about 1.2 million women worked in domestic services (e.g. cooks, maids, etc.) from 1911, this stereotypical view of women existed. However, during the war, this view had to be ignored as there was a large gap in the workforce because nearly all men capable of work were mobilised for the army and navy in order to fight the threat of the Germans. ...read more.

By the end of the war, the Victorian belief that the woman's place was at home to look after her family was near shattered as women proved to be capable of doing more than traditional 'caring' roles. Though only earning on average two-thirds of the average man's wages, being the bread-winner for the family and going out to work for the first time in traditionally male roles, many women had aspirations of how life would be like after the war. While they wanted families and a stable home, they also wanted to keep their independence because they felt more equal with men as they were performing the same tasks as they did and could keep the economy running just as well as the men could. This showed economically that women were more than capable of working as hard and well as men. Though they were unskilled and had to break up certain jobs in order to complete them, for example, a mechanic's job was ...read more.

Before the end of the war, women were also given the vote. Though the reasons for giving them the vote is unclear - whether the government thought that they deserved it after helping with the war effort or whether it was to prevent further damaging suffragette behaviour - women over 30 were granted the right to vote in general elections. This was a huge morale booster for all people fighter for equality between the sexes and this led to the role of women to be more political. It showed the people that women were capable - at least in the eyes of the government, to a certain extent - could understand policies and political arguments, enough to vote for a party they believed was worthy of governing the country. To conclude, the role of women changed drastically during the First World War, economically, socially and politically. However, though they were near equals during the war, this position was challenged by many when the men returned from the trenches and whatever economic and social freedoms women felt they had found were reduced drastically. ...read more.