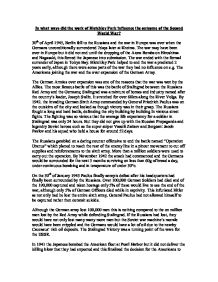 In what ways did the work of BletchleyPark influence the outcome of the Second World War?

In what ways did the work of Bletchley Park influence the outcome of the Second World War? 30th of April 1945, Berlin fell to the Russians and the war in Europe was over when the Germans unconditionally surrendered 7days later at Rheims. The war may have been over in Europe but it did not end until the dropping of the Atom Bombs on Hiroshima and Nagasaki, this forced the Japanese into submission. The war ended with the formal surrender of Japan in Tokyo Bay. Bletchley Park helped to end the war a predicted 2 years early, although there were some parts of the war they had no influence on e.g. The Americans joining the war and the over expansion of the German Army. The German Armies over expansion was one of the reasons that the war was won by the Allies. The most famous battle of this was the battle of Stalingrad between the Russians Red Army and the Germans; Stalingrad was a mixture of homes and industry named after the country's leader, Joseph Stalin. It stretched for over 60km along the River Volga. ...read more.

Together, both islands cost more lives than the D-Day invasion of Normandy. The code breakers of Bletchley Park had nothing to do with the American Decision to drop atomic bombs on the city of Hiroshima on August 6th 1945. The plane was blessed by a priest before it took of with its unforgivable load. On the impact of the bomb over 70,000 civilians were killed with many more thousands dying later from burns, various forms of cancer and radiation poisoning. Another bomb was later dropped on Nagasaki with equally horrifying results. There were a lot of events in the second world war that were not affected by the work of the people at Bletchley Park, There were still lots of aspects that were affected by their work for example they had a large influence on the war in Northern Africa and on the D-Day invasion of Normandy. In the Atlantic German U-Boats were attacking Allied Merchant ship convoys effectively depriving the British of Vital supplies that were needed for the war effort. On May 9th 1941, U110 had been about to attack an Allied convoy when it was forced to surface by British ships protecting the convoy. The German Crew surrendered. ...read more.

It was also the job of Bletchley park to locate the least defended parts of the French coast so the Allied Forces would have minimal losses during the invasion. The allies did not want the Germans to know that they had cracked the code and the allies were listening to their plans. The possession of German Military plans was vital and many soldiers died in campaigns which to anyone without any knowledge of military affair or strategy were doomed to fail but these campaigns were to lull the Germans into a thinking that their plans had not been discovered. In the final years of the wars as the Germans enjoyed the success in the regions of Belgium, the allies did not change their plan of sending thousands of troops to their death to keep the secrecy that would ultimately lead to the vital victory. To conclude Bletchley Park helped in many ways to shorten the war by helping with individual battles i.e. the Normandy Beach Landings and the War in the North Atlantic. There were also a lot of aspects through the war Bletchley park had very little or no influence over such as the ongoing fighting between the Germans and Russians and the entrance of the Americans into the war. ...read more.