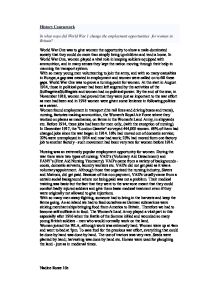 In what ways did World War 1 change the employment opportunities for women in Britain?

History Coursework In what ways did World War 1 change the employment opportunities for women in Britain? World War One was to give women the opportunity to show a male-dominated society that they could do more than simply bring up children and tend a home. In World War One, women played a vital role in keeping soldiers equipped with ammunition, and in many senses they kept the nation moving through their help in manning the transport system. With so many young men volunteering to join the army, and with so many casualties in Europe, a gap was created in employment and women were called on to fill these gaps. World War One was to prove a turning point for women. At the start in August 1914, those in political power had been left angered by the activities of the Suffragettes/Suffragists and women had no political power. By the end of the war, in November 1918, women had proved that they were just as important to the war effort as men had been and in 1918 women were given some lenience in following politics as a career. ...read more.

Their medical training was basic but the fact that they went to the war zone meant that they could comfort badly injured soldiers and give them basic medical treatment even if they were originally not allowed to give injections. With so many men away fighting, someone had to bring in the harvests and keep the farms going. As an island we had to feed ourselves as German submarines were sinking merchant ships bringing food from America to Britain. Therefore we had to become self-sufficient in food. The Women's Land Army played a vital part in this especially after 1916 when the Battle of the Somme killed and wounded so many young British soldiers - men who would normally work on the land. Women joined the WLA, although work was extremely hard. Women were up at 4am and went to bed at 7pm. To save fuel for the precious war effort, everything that could be done by hand was done by hand. The use of tractors was very rare. Seeds were planted by hand; harvesting was done by hand etc. ...read more.

Women were able to stand for election for Parliament, and Lady Astor became the first woman to take her seat in 1919. Perhaps the most long-lasting change came about for middle-class women. Before the war middle-class women could find jobs such as teachers, nurses, telephonists, typists and as sales assistants in up-market department stores. After the war there were better prospects for careers in the higher professions such as lawyers, accountants and doctors, although this change was not so much of an alteration. In 1911 women made up to 6% of those employed in higher professions. By 1951 they had only increased to 8%. After World War 1, women were no longer wanted in their war-time jobs. Women were demobilised from the army and nursing units; as the men came back they wanted their jobs in the factories, rural areas, transport and in the offices. Many of these jobs were protected for the men by trade union agreements. For those jobs which weren't, the government passed a special 'Act of Parliament' in August 1919. It was called the Restoration of Pre-War Practices Act. Women were expected to go back home or return to the traditionally 'female' trades and domestic service. ?? ?? ?? ?? Nadine Rowe 10e ...read more.