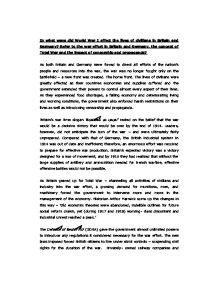 In what ways did World War I affect the lives of civilians in Britain and Germany? Refer to the war effort in Britain and Germany, the concept of Total War and the impact of censorship and propaganda? As both Britain and Germany were forced to direct all efforts of the nation's people and resources into the war, the war was no longer fought only on the battlefield - a new front was created. The home front. The lives of civilians were greatly affected as their countries economies and supplies suffered and the government extended their powers to control almost every aspect of their lives. As they experienced food shortages, a failing economy and deteriorating living and working conditions, the government also enforced harsh restrictions on their lives as well as introducing censorship and propaganda. Britain's war time slogan 'Business as usual' rested on the belief that the war would be a decisive victory that would be over by the end of 1914. Leaders, however, did not anticipate the turn of the war - and were ultimately fairly unprepared. Compared with that of Germany, the British industrial system in 1914 was out of date and inefficient; therefore, an enormous effort was required to prepare for effective war production. ...read more.

Although in comparison to Britain they had a large, well-trained army from conscription, and an efficient industrial complex, they were badly exposed over imports. A Royal Navy blockade on German trade routes took away almost 80 percent of Germany's export market - drastically affecting the economy, but more importantly, ceases imports of war products and food - of which one third was imported from other countries. Six months into the war, and already the Germans had on their hands a severe food shortage crisis. It was in Germany that the shortages were greatest, where civilian deaths from starvation greatly exceeded pre- war estimates. The OHL (General headquarters) came to dominate decision making over both the military and civilian spectrum, which became most apparent when Hindenburg and Ludendorff took control from 1916 onwards. The KRA (Raw Materials Board) was established after Walter Rathenau persuaded the War Ministry in August 1914 to set up the department as needed to make up for the lack of economic planning that had gone into the war, and in order to co- ordinate programs to ensure supply of vital food and raw materials. This included regulation of supplies - of which aimed at rationing and controlling production of resources. ...read more.

The authorities also tried to ban peace moves in the press - and the government never told the German people about the 1915 peace demonstrations in Berlin. International peace efforts were also censored and civilians were also denied information about low troop morale, casualties and desertions. The impact of World War I on both the British and German home- fronts as each nation entered into a state of Total War - was immense. In Britain, as the Defence of Realm Act extended government control over wages, hours, the nature and volume of production, and almost every aspect of civilian lives, the citizens suffered greatly amid a failing economy and deteriorating living and working conditions as prices rose and food shortages worsened. In Germany, the effects of Total War and the impact of the war were much worse. With major blockades on both war supplies and food, the civilians suffered greatly with both living conditions and their civil liberties and freedom. As the war demanded increased effort, the strain on the civilians continued to grow - and from the effects of Total war to the impact of censorship and propaganda, both the Britain and German home- fronts found themselves involved in the First World War more than they ever could have possibly imagined. ...read more.