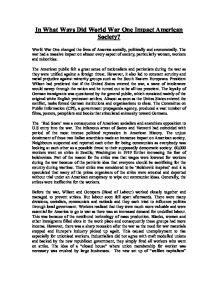 In What Ways Did World War One Impact American Society?

In What Ways Did World War One Impact American Society? World War One changed the lives of America socially, politically and economically. The war had a massive impact on almost every aspect of society, particularly women, workers and minorities. The American public felt a great sense of nationalism and patriotism during the war as they were unified against a foreign threat. However, it also led to constant scrutiny and racial prejudice against minority groups such as the South Eastern Europeans. President Wilson had predicted that if the United States entered the war, a wave of intolerance would sweep through the nation and he turned out to be all too prescient. The loyalty of German immigrants was questioned by the general public, which consisted mainly of the original white English protestant settlers. Almost as soon as the Unites States entered the conflict, mobs forced German institutions and organisations to close. The Committee on Public Information (CPI), a government propaganda agency, produced a vast number of films, posters, pamphlets and books that stimulated animosity toward Germans. ...read more.

This caused unemployment to rise especially for unionised workers. Industrialists did not agree with craft modelled unions and backed by the new republican government, they simply fired all workers who went on strike. The idea of a "closed house" where union membership for worker was necessary was crushed by large businesses. The new set up of "welfare capitalism" which was more beneficial and appealing to the workers, than union membership. This eventually resulted in the unions being dissolved by 1925. Tension and race riots between African Americans and White Americans increased rapidly during the war years of 1917-1919. Many Americans felt that African Americans ex slaves and other immigrants were inferior. Acts such as the Quota act in May 1921 tied immigration to 3% of the 1919 population. Asian immigration was considered a huge ' problem' in the west coast. Immigrants were completely unprotected from government. The re-emergence of the Ku Klux Klan and the support it was given by senior officials in government and businesses, led to an 'institutionalised' racism. ...read more.

The end of the war period had cause a recession for them and a large portion of American society involved in farming had become bankrupt. The war led to an expansion and increase in the federal government's power. Between 1921 and 1933, the Republican Party dominated American political life. . During the Republican Ascendancy 1921-29, there were three presidents. A classic president from this period was "silent Cal", Calvin Coolidge (1924-28), who believed that there was no reason for him to intervene except to veto suggestions from men in congress more active than him. No president during this period intervened to defend the rights of the workers or any other vulnerable members of society. Middle class Americans supported this 'new' policy and they had a clear majority in the poles. Presidents such as Coolidge were simply popular to the majority because kept taxes and interest rates low as the cost of war caused the standard of living for the middle class to drop drastically. In conclusion, World War One had a massive impact on America from 1917 onwards and was the basis for many reformations and changes in American society. ...read more.