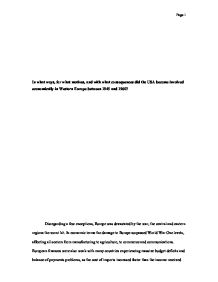 In what ways, for what motives, and with what consequences did the USA become involved economically in Western Europe between 1945 and 1960?

In what ways, for what motives, and with what consequences did the USA become involved economically in Western Europe between 1945 and 1960? Disregarding a few exceptions, Europe was devastated by the war; the central and eastern regions the worst hit. In economic terms the damage to Europe surpassed World War One levels, affecting all sectors from manufacturing to agriculture, to commerce and communications. European finances were also weak with many countries experiencing massive budget deficits and balance of payments problems, as the cost of imports increased faster than the income received from their exports. There was a chronic shortage of foreign exchange reserves, as "west European countries found it hard to earn US dollars"1 as their industrial economies were not as sophisticated as the developed American markets, and consequently Europeans could not sell to America. As anticipated, there was a pent-up demand for goods which led to serious inflationary fears and left many countries in a vulnerable state. The general consensus of European governments was that rebuilding depended not only on the policies they adopted, but the need for rapid, effective external aid; a speedily revival seemed very much out of reach otherwise. The only world power that was strong enough to provide economic aid was America. The American fear was that there would be an American depression in Europe as they would not be able to pay for US exports. ...read more.

It was thought that economic growth would be the key to social harmony and would preserve political democracy; as Hogan puts it, there was "the conviction that economic growth was the way to ameliorate social divisions"9. It was no surprise that although desperate for help, the Soviet satellites in the eastern bloc would only decline economic aid from America by Soviet leader Stalin "claiming that the conditions were not appropriate"10. Although many thought that significant funding didn't come until the 1947 Marshall Plan was implemented, in the two years following the 1945 peace, all European nations had increased their industrial output beyond pre-war levels with the exception of Austria, France, Italy and the Netherlands. This was due, in no small part, to US dollars channelled through a number of different programmes across Europe mainly in an attempt to increase food supply and aid rapid reconstruction. The Government and Relief in Occupied Areas (GARIOA) programme gave Germany $1.6 billion in the form of food, goods and services up to 1950. It was countries such as Poland, Hungary, Czechoslovakia and Albania who cherished the relief given through the United Nations Relief and Recovery Agency (UNRRA). In fact, this funding made up 11 per cent of Poland's national income but this funding was short lived as those countries under the influence of the East missed out on Marshall Aid. ...read more.

It is my opinion that US aid, in the form of the "Truman doctrine" and as we have seen the Marshall Plan, fuelled the beginnings of the cold war, a war which would only be fully over by as late as 1991. Ultimately, a European recovery was inevitable; US aid simply acted as a catalyst to speed up the rate at which the recovery was achieved. The degree to which the European recovery relied on US aid is actually quite exaggerated. The majority of European nations were very successful in generating domestic investment and when compared to their eastern counterparts, growth rates in western Europe were roughly on a par. Marshall Plan funds were used to "ease foreign-exchange bottlenecks, providing scarce dollars, and allowing growth to continue"16 at an accelerated rate. However, Barry Eichengreen points out that "Marshall-Plan-Financed imports of US goods limited the market power of European producers"17. Another factor that influenced the recovery was the fact that there was tight government control exercised on credit and investment, which conveyed a general willingness for authorities to exert their power. There were two clear motives why America stepped in to aid Europe's recovery. In economic terms they simply wanted to develop a market place, i.e. Europe, where they could continue to sell to. Simultaneously there were political significances with this help, as it was America's foreign policy objective to contain Soviet expansion, and later see the destruction of communism. ...read more.