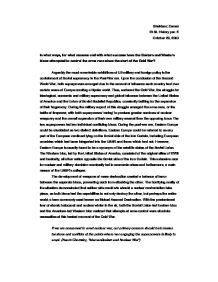 In what ways, for what reasons and with what success have the Eastern and Western blocs attempted to control the arms race since the start of the Cold War?

Shehtaaz Zaman IB SL History per. 5 October 29, 2003 In what ways, for what reasons and with what success have the Eastern and Western blocs attempted to control the arms race since the start of the Cold War? Arguably the most remarkable exhibitions of US military and foreign policy is the containment of Soviet supremacy in the Post-War era. Upon the conclusion of the Second World War, both superpowers emerged due to the amount of influence each country had over certain areas of Europe creating a bipolar world. Thus, surfaced the Cold War, the struggle for ideological, economic and military supremacy and global influence between the United States of America and the Union of Soviet Socialist Republics, constantly battling for the expansion of their hegemony. During the military aspect of this struggle emerged the arms race, or the battle of firepower, with both superpowers 'racing' to produce greater numbers of nuclear weaponry and the overall expansion of their own military arsenal than the opposing force. The two superpowers led two individual conflicting blocs. During the post-war era, Eastern Europe could be elucidated as two distinct definitions. Eastern Europe could be referred to as any part of the European continent lying on the Soviet side of the Iron Curtain, including European countries which had been integrated into the USSR and those which had not. ...read more.

These agreements and talks were extremely important sub-phases of the 1970s D�tente period. Evidently, both powers understood and recognized the imposing threat the other was upon them. At this point, the Cold War had not only 'thawed', but was beginning to heat up. The fear of nuclear attack loomed around the corner of every miniscule conflict between the US and the USSR. There are obvious reasons, therefore, why certain measures such as the previously mentioned treaties had to be undertaken. The main reasons for the Non-Proliferation treaty in 1968 are quite evident through its aims. The United Nations General Assembly had addressed and expressed concern over the growth of nuclear energy and technology. The escalation in both quantity and quality of the weapons was definitely an issue that had to be solved, thereby producing the Non-Proliferation Treaty, prohibiting the spread of nuclear advancement. The SALT I treaty of 1972 between the US and the USSR was directed to the elimination of a possible nuclear attack from either of the sides. Since the ABM treaty reduced the defensive systems of each country, it would therefore prevent the other from attacking, as it too, would take on massive destruction since the enemy could retaliate. Both powers identified and recognized the extremities of each other's military capabilities and, in consideration of their own security, undertook these measures, also including the SALT II and the STAR Talks. ...read more.

(Wolfgang k. H. Panofsky, "Arms Control: Necessary Process") Panofsky demonstrates his opinion that arms control was an absolute necessity. His positive attitude towards it shows that he obviously finds it to be successful. However, in retrospect, William A. Schwartz and Charles Derber found that controls on weapons required careful and decisive planning and that we have to accept that it did not necessarily benefit East-West relations. The disarmament movement cannot accomplish such things. This is a job for a full-fledged peace movement. (William A. Schwartz and Charles Derber, "Arms Control: Misplaced Focus") Evidently, these two men find that the efforts on arms control were fruitless in enhancing the possibility of peace between the two blocs. We can see that the successes and failures of arms control are both questionable and arguable. With the collapse of the Soviet Union and the emergence of the dominant, US-led uni-polar world, we can find that the general view on arms control efforts was that it resulted in neither success nor failure, as though it prevented nuclear holocaust and chaos, and more or less achieved every aim in each individual treaty or agreement, modern day issues have derived from its subsequent and arguable failures, such as the threat of nuclear weapons and the conflicts within in the Indian Sub-Continent, the Middle East, and North Korea. Nuclear technology remains a problematic and predominant threat the post-Cold War world order. The future is yet to be revealed. ...read more.