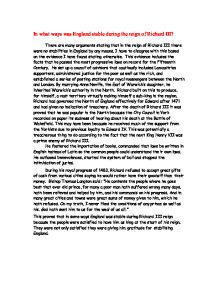 In what ways was England stable during the reign of Richard III?

In what ways was England stable during the reign of Richard III? There are many arguments stating that in the reign of Richard III there were no stabilities in England by any means. I have to disagree with this based on the evidence I have found stating otherwise. This evidence includes the facts that he passed the most progressive laws on record for the Fifteenth Century. He set up a council of advisors that cautiously included Lancastrian supporters, administered justice for the poor as well as the rich, and established a series of posting stations for royal messengers between the North and London. By marrying Anne Neville, the Earl of Warwick's daughter, he inherited Warwick's authority in the North. Richard built on this to produce, for himself, a vast territory virtually making himself a sub-king in the region. Richard had governed the North of England effectively for Edward after 1471 and had given no indication of treachery. After the death of Richard III it was proved that he was popular in the North because the City Council in York recorded on paper its sadness of hearing about his death at the Battle of Wakefield. This may have been because he received much of the support from the Yorkists due to previous loyalty to Edward IV. ...read more.

I think that because of the 'Princes in the Tower' theory Richard was never going to have an trouble-free reign especially as the mother of the two Princes, the murdered (Edward V and Richard of York) Elizabeth Woodville was on Henry Tudor's side and to prove this she wanted her daughter Elizabeth of York to marry him. Four months into his reign he repressed a rebellion led by his former supporter Henry Stafford, Duke of Buckingham, who wanted the installation of Henry Tudor, a weak Lancaster, to the throne. The rebellion was unsuccessful, however Richard realized that he would be under threat from further rebellion throughout his reign making it extremely unstable. It is a fact that England would never be stable if the North and South were not united. Richard failed to do this meaning that the instability in England was greatly increased. Richard caused resentment in that there was patronage of the northerners in the South. A good example of this is that Richard gave many of the lands in the South to the Northern supporters. This subjected England to instability and created years of uncertainty, rebellion and danger according to the fact that he had destroyed the peace further. England's government was corrupt and had a continuance of the same personnel, for example, of Richards 54 councillors, 24 had served Edward IV, and 9 were to serve Henry VII (Henry Tudor.) ...read more.

I think this may be partly due to the Wars of the Roses taking place between 1455 and 1487. The war was between the House Of Lancaster and the House of York. Richard III was never going to have a simple reign due to all the propaganda against him so you cant really say that if the king is unsuccessful then the country will be stable. I also believe that it is very difficult to reform a country and make it stable after so many years of instability before Richard III came to the throne. I think the only thing that was stable in the reign of Richard III was the Council of the North. However if there had been created a Council in the South as well he would not have been so unfair. I think it would be fair to say that because of the image problems that Richard III had he was vulnerable to negative propaganda about the death of his wife Queen Anne and about his appearance (having a deformity.) It also goes to say that because he never produced his nephews to contradict rumours of their murders, he may have been guilty. All of theses things add together to make the people wonder about whether Richard was a good king or not and if he had no one on his side it would be very difficult to be in power over the country. ...read more.