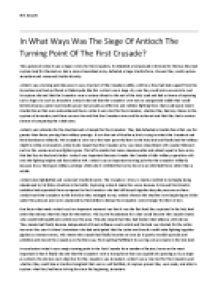 In What Ways Was The Siege Of Antioch The Turning Point Of The First Crusade?

﻿Ben Jacques ________________ In What Ways Was The Siege Of Antioch The Turning Point Of The First Crusade? The capture of Antioch was a major victory for the Crusaders, it embodied a turnaround in fortune for them as they had capture land for themselves, had a more streamlined army, defeated a huge Muslim force, showed they could capture Jerusalem and worsened Muslim disunity. Antioch was a turning point because it was a true test of the Crusaders ability, until now they had had support from the Byzantines and had not faced a Citadel quite like this. Antioch was a huge city, one they could not even encircle, and its capture showed that the Crusaders were a serious threat to the rest of the Holy Land and had a chance of capturing such a huge city such as Jerusalem. ...read more.

The Crusaders were now the most powerful force in the holy land and finally had the military might to strike at Jerusalem. Antioch also meant that the Crusader army was more streamlined with weaker followers such as the women and non-fighters gone. This left a smaller but more manoeuvrable and almost equal in force army that had less to feed and shelter. Antioch was important because it made the Crusade a fuller military operation with only the fighting knights and foot soldiers left. Antioch was an important turning point for the Crusaders militarily because it saw them gain military prestige whilst also it whittled their army down to an elite fight force rather than a rabble. Antioch also highlighted and worsened Muslim disunity. ...read more.

However this wasn?t Urban?s intentions who had anticipated that the Latins and Greeks would unite fighting together against a common enemy. This meant the crusade had finally become an exercise in purely Frankish pursuits and ambition and moved the crusade even further away from spiritual fulfilment to carving out an empire in the holy land. In conclusion Antioch was a major turning point in the First Crusade for a number of factors, however the most important is that it finally showed that the Crusaders were a strong force that was capable of capturing a city as large as Antioch, the obvious next objective for the crusaders was Jerusalem. Antioch was a true test for the Crusaders and whether they could take a Muslim stronghold that was so well fortified; its capture proved they were ready and able to capture what they had been striving for since the beginning, Jerusalem. ...read more.