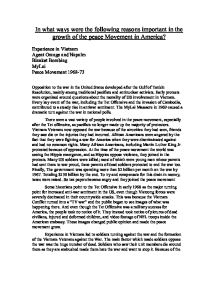 In what ways were the following reasons important in the growth of the peace Movement in America?

In what ways were the following reasons important in the growth of the peace Movement in America? Experience in Vietnam Agent Orange and Napalm Blanket Bombing MyLai Peace Movement 1968-73 Opposition to the war in the United States developed after the Gulf of Tonkin Resolution, mainly among traditional pacifists and antinuclear activists. Early protests were organized around questions about the morality of US involvement in Vietnam. Every key event of the war, including the Tet Offensive and the invasion of Cambodia, contributed to a steady rise in antiwar sentiment. The MyLai Massacre in 1969 caused a dramatic turn against the war in national polls. There were a vast variety of people involved in the peace movement, especially after the Tet offensive, as pacifists no longer made up the majority of protestors. Vietnam Veterans now opposed the war because of the atrocities they had seen, friends they saw die or the injuries they had incurred. African Americans were angered by the fact that they were fighting a war for America when they were discriminated against and had no common rights. ...read more.

These images changed public opinion and made the peace movement grow. Experience in Vietnam led to soldiers turning against the war and the formation of the Vietnam Veterans against the War. The main factor which made soldiers oppose the war was the huge number of dead. Soldiers who saw their unit members die around them as they are ambushed made them hate the war and want to stop it. Because of the jungle climate there was friendly fire, that is, killing your own men, this had psychological effects on soldiers such as flashbacks. All these aspects turned all soldiers against the war and if they survived they protested. Agent Orange and Napalm caused the peace movement to grow because of the political effect they had. If the Napalm bombs US planes dropped were all on target, there wouldn't have been a problem, but unfortunately some napalm hit civilian villages, burning men, women and children with no prejudice. Cameramen took pictures of these civilian casualties, and when the press printed them the public were further opposed to the war. Agent Orange was in some ways worse, because it poisoned not only Vietnamese civilians but US soldiers too. ...read more.

A cameraman traveling with the platoon took pictures of their last moments alive. When the story came out, the public was shocked. The people could not believe that American men would commit such an atrocity and some people refused to acknowledge it ever happened. But those who did, a massive number of people, joined the peace movement. The Protest Movement 1968-73 marked a change in the war. It was no longer military, but political. Such so that President Lyndon Johnson decided not to stand for office a second time. The next president would not be able to complete the three previous president's wish and stop communism, but instead would have to adhere to the public's wish. And so Richard Nixon narrowly won the election by promising to "bring our boys home" Which he did with his process of Vietnamisation. After the Tet Offensive, a military success, the US could have won the war with more men. But because of the press releasing pictures of all the awful events, public opinion changed, and the peace movement became massive. The protests held ended the war and stopped a possible victory for the US. But it also stopped more soldiers from dying. ...read more.