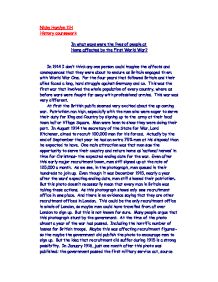 In what ways were the lives of people at Home affected by the First World War?

Nicky Hamlyn 11H History coursework In what ways were the lives of people at Home affected by the First World War? In 1914 I don't think any one person could imagine the affects and consequences that they were about to endure as Britain engaged them with World War One. For the four years that followed Britain and their allies faced a long, hard struggle against Germany and co. This was the first war that involved the whole population of every country, where as before wars were fought far away with professional armies. This war was very different. At first the British public seemed very excited about the up coming war. Patriotism ran high, especially with the men who were eager to serve their duty for King and Country by signing up to the army at their local town hall or Village Square. Men were keen to show they were doing their part. In August 1914 the secretary of the State for War, Lord Kitchener, aimed to recruit 100,000 men for his forces. Actually by the end of September that year he had an extra 75% men at his disposal than he expected to have. One main attraction was that men saw the opportunity to serve their country and return home as 'national heroes' in time for Christmas- the expected ending date for the war. Even after this early major recruitment boom, men still signed up at the rate of 125,000 a month. As we see, in the photograph, men queued in their hundreds to join up. Even though it was December 1915, nearly a year after the wars' expecting ending date, men still showed their patriotism. But this photo doesn't necessarily mean that every man in Britain was taking these actions. ...read more.

Therefore war brought about many changes to the government. A new Prime minister was appointed halfway through the war, named Lloyd George who installed many new changes. He successfully planned strategies and naval tactics that allowed food into Britain. It was also under Lloyd George government that women earned their right to vote by law. This was a major turning point. Since women were now working in previously male dominated areas, their social standings altered. Whereas before women would never have dined without the company of her husband or male partner in a report issued by the 'The daily mail' April 16th states that women were now dining alone or with friends in restaurants where they discussed work, fashion and theatres. This shows that for the first time women could be capable of having their own social lives, as well as working during the week. On top of this there is no reason why this source would be seen as unreliable. 'The daily mail' was a conservative paper as in it did not like change, and could have been against women and their independence. This source does not show any indication that it is trying to persuade their readers that women with independence is a bad thing. None the less the tone does seem to imply that this newspaper is going to have to accept, like the rest of Britain, the change with women and their social status. After all they were working in ammunitions and supporting the war effort, so their money was well deserved and could be spend how the women wanted. As we see in source C5 (ii) workingwomen were earning nearly ten times as much as a full paid male corporal. ...read more.

Although this victory was greatly influenced by Lloyd George, prime minister at that time, but who started the war off as an ordinary MP. His reign as PM was caused due to a split in the Liberal party, inflicted by the public who were pointing the finger at the government when the war started to turn for the worse. Then, not everyone was part of the war. Some, known as conscientious objectors, did not go to the front-line. Instead opting to spend that period inside a prison cell. Also the high-class communities, even if supported the war, did not directly fight. This led to heavy criticism when the war was over. The war had changed the attitudes and opinions of the young soldiers who had returned from war. They no longer respected those of higher class or older generation as once before. Also these independent soldiers also refused to attend church, questioning god after living through the tortures and horrors of war. Lastly, the end of the war brought with it a change in standards. The idle rich were now ashamed because of their lack of physical support during the war years. More importantly, because of the amount of losses in the war, jobs were easy to come by. Even the poorer communities had money to house themselves, although they were greatly helped by the many acts passed by the government of the war. Whatever role the people of the British public played in the war, they were affected. Whether they lost a loved one in battle, went to work in munitions, spent that time in prison as a conscientious objector, or even didn't physically, if verbally support the war. There can be no arguments that the period between 1914-1918 has affected the way British public lived during that time, and ever since. ...read more.