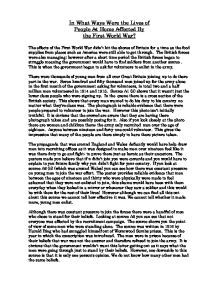 In What Ways Were the Lives of People At Home Affected By the First World War?

In What Ways Were the Lives of People At Home Affected By the First World War? The effects of the First World War didn't hit the shores of Britain for a time as the food supplies from places such as America were still able to get through. The British forces were also managing; however after a short time period the British forces began to struggle meaning the government would have to find soldiers from another source. This is when the government began to ask for volunteers to enlist in the army. There were thousands of young men from all over Great Britain joining up to do there part in the war. Seven hundred and fifty thousand men joined up for the army alone in the first month of the government asking for volunteers, in total two and a half million men volunteered in 1914 and 1915. Source A1 (ii) shows that it wasn't just the lower class people who were signing up. In the queue there is a cross section of the British society. This shows that every man wanted to do his duty to his country no matter what they're class was. The photograph is reliable evidence that there were people prepared to volunteer to join the war. ...read more.

This is the year in which the conscription was introduced. The men were in prison because of their beliefs that war was not the answer and therefore refused to join the army. It is obvious that the government wouldn't want this letter getting out as it says what the men were going through just to stand by their beliefs. However, one downside to this source is that it is only one person's opinion. We do not know how many other men had the same beliefs. When the war broke out the majority of the British public were on the government's side. Even Suffragettes and strikers stopped their protests in order to help the war effort. Due to the war the government faced some big chances. In 1916 the parties began to work together to help with the war effort. By this time Lloyd George was the Prime Minister. Looking at Source B3 we are getting the impression that the parties are happy about fighting the war together, however this source is only a photograph and may not be a reliable source. What most people do when they see a camera is to smile. This tells us that the parties may not be happy with the way that the war is being fought. ...read more.

This tells us that people were interested in what was happening in the war and wanted to know. However towards the end of the war the sales had dropped down to approximately a million papers in 1918. This may be because people were tired of hearing about the war and wanted it to end. The source gives no indication of why the sales have dropped. One possible reason of the drop in newspaper sales is because of conscription - there would be fewer men to buy papers. In conclusion to the sources I have looked at it is obvious that people's lives were affected during the war. The main people who felt the impact of the war most heavily were the middle classes, the women in there families may have to go out to work for the first time. These jobs could be in factories or offices. A benefit for the women who did begin to work was that they had some independence and were able to go out to pubs and restraints on there own. However the women who were working in factories were not aware of the dangers there were with working with explosives, there is obviously the chance of one exploding but there was the added danger of breathing in large amounts of toxic gases over long periods of time. ...read more.