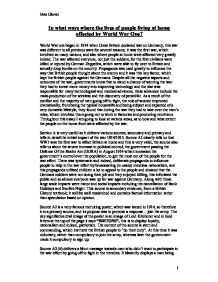 In what ways where the lives of people living at home affected by World War One?

In what ways where the lives of people living at home affected by World War One? World War one began in 1914 when Great Britain declared war on Germany, this war was different to all previous wars for several reasons; it was the first war, which involved so many nations, and also where people at home were affected very greatly indeed. The war affected everyone, not just the soldiers, for the first civilians were killed or injured by German Zeppelins, which were able to fly over to Britain and actually drop bombs on the country. Propaganda was used greatly to influence the way that British people thought about the enemy and it was this key factor, which kept the British people against the Germans. Despite all the negative aspects and outcomes of the war, governments knew that to stand a chance of winning the war they had to invest more money into improving technology and the war was responsible for many technological and medical advances, these advances include the mass-production of the wireless and the discovery of penicillin. As a result of the conflict and the majority of men going off to fight, the role of women improved dramatically, from being the typical housewife and being subject and expected of a very domestic lifestyle, they found that during the war they had to take over the men's roles, which involved them going out to work in factories and producing munitions. Throughout this essay I am going to look at various areas, as to how and what extent the people on the home front were affected by the war. Section A is very useful as it delivers various sources, secondary and primary and tells in detail the initial impact of the war 1914/1915. Source A1 clearly tells us that WW1 was the first war to affect Britain at home and this is very valid, the source also tells us about the severe increase in political control, the government passing the Defence Of the Realm Act (DORA) ...read more.

Many people believed this government propaganda, and as a result Germans living in Britain faced discrimination. Impact was very great in business sectors and many shopkeepers refused to sell German products, the same ideas were present in cafes and restaurants, and the fact that The Royal Family changed their name from a German name to an English name shows how profound and great the impact of anti-German hysteria was. Nationalistic mobs attacked and ransacked shops owned by Germans in some of the major cities in Britain; only a few of the rioters were arrested and those that did were very lightly punished, this shows that the authorities turned a blind eye towards this extreme right wing nationalism. Germans living in Britain were taken away and put into camps until the war was over, for their safety, apparently. The second part of B2 is a photograph that clearly shows anti-German feelings. It shows a mass of people attacking a German shop and this photograph alone shows that the government's propaganda has worked. Source B3 is secondary evidence written by Robert Roberts, he tells us about better conditions for children as a result of war. He states that by late 1916 children looked better fed, this could be ensued by the fact that there were numerous technological and medical advances during the war. However food shortages were very real and it seems quite hard to comprehend how slum children were becoming better nourished - this could be down to the rationing, giving them a chance to actually have more than they normally have. The source is questionable towards its reliability; the source is secondary, published in 1971. Source B4 (ii) is a political source and shows that the Labour Party benefited in 1916 when Lloyd George formed his war cabinet - they stressed at the same time that labour had no responsibility for the pre-war diplomacy that had led them to the war. ...read more.

It highlights the feelings of those left behind and how they were affected. The source is remembered by Vera Brittain, who worked as a VAD in France, the source is useful because it shows the feelings of those who stayed behind and lost people they knew. Source D7 is very useful. It shows, how in the latter stages of the war, people began to realise the actual amount of casualties and the horrifying conditions the soldiers faced. The disillusionment of patriotism and romantic hero-worship of the early years and given way to the reality. The source is from the Scottish Record Office and is a trustworthy and accurate description of the latter stages of the war. Source D8 shows how newspapers responded to the end of the war - patriotism is shown and the front page is composed entirely of pictures. Flags are present, showing nationalism. This is primary evidence - November 12, 1918. Overall section D is very useful as it shows the long-term effects and indeed, the psychological effects and lasting impact that the war had on those who lost people they knew and on the next generation. It is clear to see that the war had a great impact on the lives of the people at home. This impact was spread across several areas. Some of these effects were on women - they gained independence and were the closest they had ever been to political equality with men, as they gained the right to vote. The lives of the British people on the home front were affected greatly by the food rationing and the use of propaganda influenced the way the people acted and thought towards German people, Germans living in Britain became the victims of discrimination and their establishments (such as shops and houses) were ransacked. To say the least, the greatest impact of the war was the loss of thousands of men and this impact not only affected the people on the frontline and the home front but it would effect countless generations afterwards. Max Glover 1 ...read more.