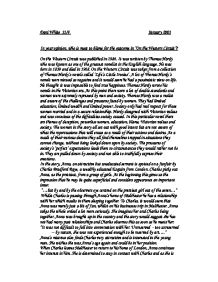 Dani White 11/4 January 2001 In your opinion, who is most to blame for the outcome in "On the Western Circuit"? On the Western Circuit was published in 1984. It was written by Thomas Hardy who was known as one of the greatest novelist in the English language. He was born in 1839 and died in 1928. On the Western Circuit was taken from a collection of Thomas Hardy's novels called 'Life's Little Ironies'. A lot of Thomas Hardy's novels were viewed as negative and it would seem he had a pessimistic view on life. He thought it was impossible to find true happiness. Thomas Hardy wrote his novels in the Victorian era. At this point there were a lot of double standards and women were extremely repressed by men and society. Thomas Hardy was a realist and aware of the challenges and pressures faced by women. They had limited education, limited wealth and limited power. Society only had real respect for those women married and in a secure relationship. Hardy disagreed with Victorian values and was conscious of the difficulties society caused. In this particular novel there are themes of deception, powerless women, education, blame, Victorian values and society. The women in the story all set out with good intent but are not aware of what the repercussions that will ensue as a result of their actions and desires. As a result of their various desires they all find themselves trapped in situations they cannot change, without being looked down upon by society. The pressures of society's 'perfect' expectations leads them to circumstances they would rather not be in. They are pulled down by society and not able to truthfully express their emotions. In the story, Anna, an attractive but uneducated servant is spotted on a funfair by Charles Bradford Raye, a wealthy educated Esquire from London. Charles picks out Anna, as the prettiest, from a group of girls. ...read more.

When Charles discovers that Anna is pregnant, firstly he raises her hopes by assuring her he will come and see her. This is soon over ridden when he sends another later saying he cannot get away and will not be visiting her. Considering the circumstances you would assume that Charles would rush to see Anna and look try to comfort her and look after her as she is carrying his child alone. It takes another cleverly written letter from Edith Harnham to make Charles take responsibility for his actions and say he will look after Anna. He deciders to marry Anna but I think he is only persuaded to do this because of the pretty and clever letters he receives from Edith. His reason for the marriage is obviously not based on love. Society would come into the story here; Charles cannot leave Anna, a poor young servant to bring his child up alone. She would obviously be looked down on and if it was found out he had made he pregnant he may also not be thought as highly off. We can see how society would react from Mr Harnhams reaction. When he finds out Anna is pregnant he instantly wants her to leave and she is told to leave the house. "...an inkling of Anna's circumstances reached the knowledge of Mrs. Harnhams husband or not cannot be said, but the girl was compelled, in spite of Edith's entreaties, to leave the house" Charles suspiciously wants the wedding to be private. This suggests he is not proud of his bride and surprisingly considering why he chooses her initially does not want to show her off. He may be ashamed of his reasons for marrying Anna, or feel very guilty, so he does not want a lot of people to witness the wedding. From another point of view, Charles could be seen to be just a young romantic man, who made one mistake and now has to pay the consequences for the rest of his life. ...read more.

She has never experienced true love and this may have been her only chance but she is unable to do it. Society traps her in her current marriage although she is lonely and longing for love. She also longs for children, which her and her husband do not have and he is not considering. She is only driven by desires that she should not really express. It may have been hard to keep such passionate feelings inside and writing the letters would have made her aware of Charles and Anna's relationship constantly. At the end of the story, although she has to go home knowing she will never be able to be with her true love, she does make sure Anna is married and goes back to her husband. She must have suffered immensely with divided loyalties. Society and their pressures may have influenced the women's actions in the story. Hardy was aware of the difficulties that women faced at this time and the story highlights this. He knew that sexual desire was evil and women were powerless. They had no vote and were economically dependant upon men. They could not be fulfilled. There lives were not dictated by themselves. All the characters in the play are driven by uncontrollable desires. Hardy would say that no one could control his or her fate or future. He believed humans were at the mercy of forces beyond their control. My sympathies would lie mostly with Charles and Anna, as they will now have to spend the rest of their lives pretending and making people see their relationship for something it is not. I think I would blame Edith mostly because she was older and more experienced with the world and you would think she would have more knowledge to stop her acting the way she did. I do believe all the characters must have found it hard given the restrictive culture in their society not to be able to express the feelings they held for each other. This would definitely resulted in many being unable to fulfil their hopes and aspirations. ...read more.