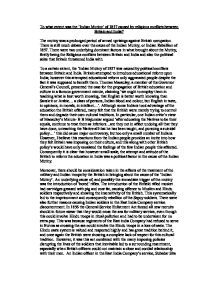 To what extent was the 'Indian Mutiny' of 1857 caused by religious conflicts between Britain and India? The mutiny was a prolonged period of armed uprisings against British occupation. There is still much debate over the cause of the Indian Mutiny, or Indian Rebellion of 1857. There were two underlying dominant factors in what brought about the Mutiny, firstly being the Religious conflicts between Britain and India and also the political seize that Britain threatened India with. To a certain extent, the 'Indian Mutiny of 1857 was caused by political conflicts between Britain and India. Britain attempted to introduce educational reform upon India; however this attempted educational reform only aggravated people despite the fact it was supposed to benefit them. Thomas Macaulay, a member of the Governor General's Council, presented the case for the propagation of British education and culture in a famous government minute, claiming 'we ought to employ them in teaching what is best worth knowing, that English is better worth knowing than Sanskrit or Arabic... a class of persons, Indian blood and colour, but English in taste, in opinions, in morals, in intellect...'. Although some Indians took advantage of the education the British offered, many felt that the British were merely trying to control them and degrade their own cultural traditions. ...read more.

However, it was this act combined with the many imposing policies disrupting the lives of the soldiers that inevitable led to a surrounding resentment, especially when British officers could not maintain a close and cordial relationship with their men. An Indian officer in the East India Company's service, Subedar Sita Ram, who published, 'From Sepoy to Subedar', tellingly of the pre-mutiny period stated 'he is spoken of as "nigger"... as evidence of spirit and as a praiseworthy sense of superiority over the sepoy to treat him as an inferior animal'. Although this mistreatment alone would not have caused the sepoys rebellion, the treatment and disrespect Indian soldiers faced in the military, combined with other political factors, would have been an additional cause of resentment and conflict between the Britain and India, which would have increased the feelings of rebellion. However, to a large extent the mutiny was caused by religious conflicts between Britain and India. Firstly, India feared the threat of religious takeover and resented the religious views the British Evangelical Christian missionaries began imposing on them. There were threats to certain requirements of indigenous Hindu and Muslim practice, and both Hindu and Muslim leaders feared that, as part of its modernisation and westernisation programme, the British intended to replace their traditional customs and religions with those of Christianity. ...read more.

Although Hindu reformers approved of the suppression of the suttee, millions more saw it as an attack on a custom sanctified by four millennia of practice. This would have been seen as a direct threat on Indian culture by the Indian people and the build up of offensive British behaviour and views on Indian religions would, doubtlessly lead to resentment and distain for the British people and their policies. I strongly believe that these imposing and inflicting views of the British, quite rightly so, cause major upset amongst the Indian population and played a very significant part in bringing about feelings of rebellion and consequently the Indian Mutiny. The factors leading to the Mutiny were caused by combining political and religious problems and conflicts between India and Britain. However, I believe that the religious factors are most dominant in causing the mutiny. This is because, the Indians would have seen the British on many occasions show direct ignorance, disrespect and insensitivity of the culture and religious views. The policies introduce that portrayed this view, disrespected their religion simply because the British didn't like a certain tradition or cultural aspect. Religion is highly important to many people and the feeling of loss of religious identity, and cultural and religious traditions are seen to be under threat, people will fight for their religious freedom, and that is what the Sepoys believed they were doing. By Hannah Page ...read more.