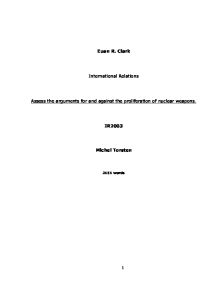 Euan R. Clark International Relations Assess the arguments for and against the proliferation of nuclear weapons. IR2003 Michel Torsten 2151 words Introduction This essay will mainly look at the arguments from two of the present day's most prolific thinkers on the subject of nuclear weapons (NWs). The main subject matter for this essay will come from The Spread of Nuclear Weapons a joint effort by both of these thinkers. It will look firstly to the arguments of Kenneth Waltz: realist thinker and proponent of the argument in favour of nuclear weapons. Secondly there is a discursion to the arguments of Scott Sagan: anti-proliferation thinker and extensive writer on the subject. Lastly the essay looks at some of Sagan's arguments from other publications in a critical show of how his reasoning is not as robust as he would like us to think. A Case in favour of Nuclear Weapons i) The Defensive Ideal - dissuasion through defense. Waltz, the realist, argues that "more may be better" in his article under that title. He claims a certain 'military logic of self-help systems.'1 In holding with the realist tradition, it is due to the anarchic system of states and the principle of self-help within this system, it is providing security which is the individual state's 'most important way of helping itself.'2 Similarly, building "...defenses so patently strong that no one will try to destroy or overcome them would make international life perfectly tranquil."3 ii) ...read more.

Sagan holds that objective aims of the state are belittled by such stimuli and have their main focus on internal matters, rather than on external threats to national security. Consequentially, a government under such (strong) military persuasion has its "professional competence as a fighting force"18 Organisation at highest levels not always rational The crux of Sagan's argument lies in his view of the matter from an "organisational perspective"19 and forms the basis for the rest of his main argument. He says that two topics in organisational theory mar the view that those in charge of NWs (chiefly government and military organisations) are purely rational in their organisational behaviour. Such institutions use simplified models to understand the more complex 'outside world'. They also do not use distinct or discrete rational decisions, rather that they use standardised and formalised procedure to deal with the necessity of coordinating their internal activities. They 'satisfice' ('the finding and accepting of the first option that is minimally satisfying') rather than find the most agreeable course of action. Also, the gathering of information is not done from a 'complete' basis, rather it tends to be done in regard to the researcher's past areas of experience, training and responsibilities. He goes on to say that factors such as internal politics and the type of language used within such organisations is important in constructing how that organisation views any particular ...read more.

In doing so I also hope to have shown how he has weakened his own stance by looking at the problem from behind the main stage. He has veered away from the main issues at hand, and instead focused on issues that may have an effect on our conceptualization of the use of NWs, but do not hold a conclusive show of evidence that might suggest that we do not really need NWs. In short, his arguments are strong, but have more to do with the logistcs and management of NW systems/organizations than do issues affecting the present need for NWs. Bibliography Bueno de Mesquita, B., & Riker, W, H., An assessment of the Merits of Selective Nuclear Proliferation, Journal of Conflict Resolution 26, no. 2, June 1982. Evans, G., & Newnham, J., The Penguin Dictionary of International Relations, Penguin Reference, London, 1998. Freedman, L., The Evolution of Nuclear Strategy, 3rd Edit., Palgrave Macmillan, Basingstoke, UK, 2003. Sagan, S., The Commitment Trap, Commitment Trap: Why The United States Should Not Use Nuclear Threats to Deter Biological and Chemical Weapons Attacks, Internatioanl Security, Volume 24, Number 4, 1 April 2000 Sagan, S., The Problem of Redundancy Problem: Why More Nuclear Security Forces May Produce Less Nuclear Security, Risk Analysis, Vol. 24, No. 4, 2004 Waltz, K., and Sagan, S., The Spread of Nuclear Weapons, A Debate Renewed, W.W. Norton and Co., New York, USA / London, UK, 2003. ...read more.