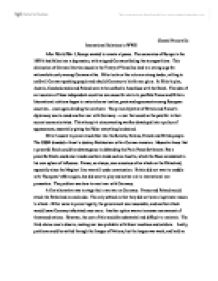 Chantel Pomerville International Relations in WWII After World War I, Europe wanted to remain at peace. The economies of Europe in the 1930's had fallen into a depression, with stripped Germany feeling the strongest blow. This diminution of German liberties issued in the Treaty of Versailles lead to a strong urge for nationalistic unity among Germans alike. Hitler took on this role as a strong leader, willing to unify all German-speaking people and rebuild Germany to his former glory. In Hitler's plan, Austria, Czechoslovakia and Poland were to be unified in Anschluss with the Reich. The idea of an incursion of these independent countries was cause for alarm to pacifists France and Britain. International relations began to materialize as treaties, pacts and agreements among European countries - once again dividing the continent. The prime objective of Britain and France's diplomacy was to evade another war with Germany - a war that could not be paid for in their current economic status. ...read more.

Hitler found a way around this by creating a non-aggression pact with Poland. Poland, who had made former alliances with France, now feared too close of a relationship with them. Germany also increased its influence in Eastern Europe by established trade agreements with nations that were hard hit by the depression. Hitler continued rearmament of Germany, and announced the Luftwaffe in March 1935, along with his mandatory military enlistment plan. These were flagrant violations of the Treaty of Versailles, and France and Britain stood back and watched Germany rearm, for fear of aggravating the F�her. What France and Britain, along with Italy did agree upon was the fact that Germany should not occupy Austria. They created a Stresa Front that would uphold Austrian sovereignty. Russia also formed alliances of mutual agreement with France and Czechoslovakia. Britain secretly negotiated the Anglo-German Naval Agreement, allowing Germany to breach the Treaty of Versailles and form a Navy thirty-five per cent of Britain's, in an attempt at appeasing Hitler, who claimed he only wanted to unify German people, and nothing more. ...read more.

Hitler would not be satisfied with unifying Germans, he wanted a full conquering of Europe, and Poland was to be his next victim. On March 31st, Chamberlain reversed his policy, stating that if Poland were to be attacked, Britain and France would "lend the Polish Government all support in their power". Soon thereafter Britain and France allied with Romania and Greece. Shockingly, after negotiations with Britain, the Soviets signed a non-aggression pact with Germany in August 1939, and secretly agreed how they would distribute Poland once it was conquered! Germany invaded Poland on September 1st, and Britain and France declared war on the Reich on the 3rd. International relations in Europe before WWII can be classified as a policy of appeasement. Chamberlain wanted to prevent war without war, and by doing so, he gave Hitler and Mussolini everything they desired. France tagged along with Britain and maintained this policy, while the United States maintained isolation. Pacts between nations were frequently formed, and many secret agreements lead to sparks between other nations. Preventing the war could have been substantially easier if the European powers had unified to crush Hitler faster, and placed another leader into power. ...read more.