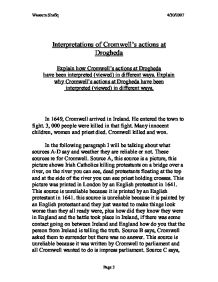 This source is unreliable because again it is a letter from Cromwell to parliament and Cromwell wanted to impress parliament. Source D says, Cromwell was write there was no more fighting, all the other towns surrendered. This source is reliable because it is written by a modern historian and is likely to know what he/she is talking about. Modern Historians do lots of research from books, internet, etc. In the following paragraph I will be talking about what sources E-H say and whether they are reliable or not. These sources are against Cromwell. Source E says, the Irish had done something wrong to the lives of poor Protestants. He is persuaded that it is the righteous judgement of god upon the barbarous wretches. This source is unreliable because, Cromwell thinks he is god, because in the text he says "I am persuaded that this is a righteous judgement of god upon the barbarous wretches." ...read more.

So Charles II would not like him so obviously Charles friend won't like him, so he would lie Source H says, Cromwell failed, he still killed 2, 000 more people, so he was wrong by saying in source C that, killing these 1, 000 people, this will prevent me from killing more in other towns. This source is reliable because it is written by a modern Irish historian and is likely to know what he/she is talking about, because the do plenty of research before hand. Source B and source G disagree about what happened at Drogheda. Source B was written by Cromwell but source G was written by a friend of Charles II. They would not agree because Cromwell killed Charles I at the end of the Civil war. So Charles I wouldn't like him, and if Charles II didn't like him then obviously Charles friend wouldn't like him. I would find sources D,F and H. Waseem Shafiq 4/30/2007 Page 3 ...read more.