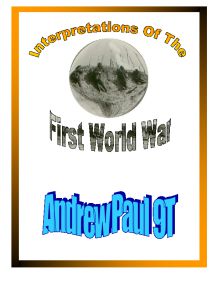 Interpretations of The First World War.

This is my essay on the interpretations of The First World War. I will be giving my interpretations on the sources A to H we have been given. I will explain what type of source it is, whether it is a primary or secondary source and then how useful it would be for a study of the Western Front in World War One... Source A has been taken from an English textbook that was published in 1995. It is a piece of writing about what would happen when you enlisted and what would happen if you if you tried to commit cowardice and mutiny. It seems to be a secondary source because it has been written by someone who was not at the war at the time and he/she will have selected the most solid sources that are genuine and trustworthy. It has obviously been created by an expert because it has been taken from a school textbook. Source B is a postcard that had been published by the British government for soldiers to send home to their families. It is black and white and has a picture of a soldier leant against a trench wall dreaming of his home. It also has a poem called A Soldiers Love Song. This is definitely a primary source because it was there at the war when it was going on and they will have been used by the soldiers. It portrays the soldier being happy but this was very untrue. It put a false face on the war for the relatives and loved ones back at home. Source C is a painting called Paths To Glory which was painted by someone called C.R Nevinson who served the Red Cross during the First World War. It was apparently draw in 1917 and it wasn't allowed to be shown until after the war was over. It shows two soldiers lying face down in a ditch. ...read more.

This source does have some advantages but it has quite a lot of disadvantages. It does give a clear and accurate picture of the uniforms and weapons used by soldiers at the time. It also gives a good clue about what the trenches looked like although it is missing the grizzly bits like the huge spools of sharp razor wire and the rags of clothing where people have tried to siege the trench but were in vain in doing so. The source disadvantages are that it doesn't give that good a pictorial description of the war. It paints a false picture over the event to calm and settle the nerves of the soldier's friends and relatives. It isn't and can't be biased because it isn't an eyewitness account, nor does it have an account on it, just a simple poem called "A Soldiers Love Song." This source is half-and-half about whether you can trust it or not. It is good to have for reference to uniforms and weapons but is decisively bad on things like the war description. Instead of showing the murky skies, bombs, desolation and carnage, it puts a false and happy face as if there is no violence at all. It is not a good source to see what conditions in battle were like but it is good for what soldiers and their inventory looked like. This would not be a good source to have in a study of World War One. Source C is a painting called Paths to Glory. It was painted by someone called C.R Nevinson who served the Red Cross during World War One. It was illustrated in 1917 but it wasn't exhibited until after the war for obvious reasons. This is because it has two soldiers who have been fatally wounded face down in a ditch. Their clothing is all ragged and loose so they must have taken a hard landing. ...read more.

This probably means that this source is quite reliable. This source is quite disturbing if you read it because with only five minutes to zero hour he was killed by being shot in the head. It is probably the most awful and gruesome way to die. This source is quite reliable because there are a few key points, which suggest that it could be an eyewitness report and it has lots of detail regarding Wilfred Neville's death. This means that it could be very useful in a study of World War One. The disadvantages with this source are that it is an anonymous piece of writing. This means that someone could have made this death up because maybe the real reason may have been much more painful and gruesome. Plus if it is an anonymous piece of writing, then anybody could have written it and just made up a reason for his death so his family wouldn't have to question what happened to him. This would make it much easier for them not having to worry about what happened. However, all in all, this is a good source to have for a study of World War One because it sounds like the writer (whoever he is) was an eyewitness to the event. It is also pretty solid evidence because it has been very hard to pick holes in it. So this is a good source for a study on World War One. Most of the sources I was given were quite good. Most would be handy in a study on World War One because the evidence showed that they were pretty solid. Some however weren't too good. You could tell some sources weren't too good just by looking at them e.g.: the cigarette advert which was a piece of propaganda and some just didn't contain enough evidence and detail e.g.: the News of the World extract. Thank you for reading my essay. I hope you have enjoyed it and it has been of some use to you. ...read more.