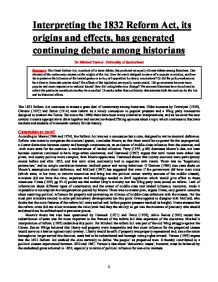 Interpreting the 1832 Reform Act, its origins and effects, has generated continuing debate among historians

Interpreting the 1832 Reform Act, its origins and effects, has generated continuing debate among historians Dr Michael Turner. University of Sunderland Summary: The Great Reform Act, a product of in tense debate, has produced an equally diverse debate among historians. One element of the controversy centres on the origins of the Act. How far was it designed to stave off a popular revolution, and how far to preserve the influence of the landed gentry or to buy off opposition by timely concessions? Or did the policy-makers not have time to formulate precise aims? The effects of the legislation are equally controversial. Did governments become more popular and more responsive to national issues? How did voting behaviour change? The answers historians have found tend to reflect the particular constituencies they have studied. Diversity rather than uniformity characterises both the motives for the Act and its historical effects. The 1832 Reform Act continues to arouse a great deal of controversy among historians. Older accounts by Trevelyan (1920), Christie (1927) and Butler (1914) treat reform as a timely concession to popular pressure and a Whig party manoeuvre designed to weaken the Tories. But since the 1960s there have been many alternative interpretations, and as we enter the new century it seems appropriate to draw together and reexamine these differing opinions about a topic which continues to fascinate teachers and students of nineteenth-century British history. Concession or cure? According to Moore (1966 and 1974), the Reform Act was not a concession but a cure, designed to revive electoral deference. Reform was meant to reorganise the electoral system, concludes Moore, so that there would be no power for the unpropertied, a clearer distinction between county and borough constituencies, an exclusion of middle-class influence from the counties, and - with more seats for the counties - a reinforcement of landed influence. ...read more.

After 1832 Peel demonstrated that he was reconciled to institutional reform, and he saw clearly that the Reform Act made the influence of electors much more significant than it had formerly been. To Phillips (1980), the expansion of the electorate is a clear indication that reform was a concession, intended to appease the nation and satisfy a growing desire for inclusion in the political process. Political activity had mushroomed since the 1780s, and the reform of 1832 'created a voting public corresponding reasonably well, proportionately, to that segment of the population apparently meriting inclusion among the electorate as a result of several decades of sustained political participation'. Phillips presents a coherent argument, though it is easy to confuse effects with intentions. In a detailed examination of parliamentary boroughs, Phillips (1992) has shown that the Reform Act significantly altered voting behaviour in some locations, but that the nature of change varied from place to place. Phillips argues that after 1832 voting became clearly and consistently partisan (partly an unintended consequence of voter registration). Voter turnout increased (it was already high in many places). Religious affiliation had more influence over voting choices than social class, as had been the case before 1832, and national issues rapidly came to dominate elections. Some electoral corruption continued, though it was 'politically irrelevant' and rarely determined voting choices and election results. Another element of continuity, therefore, was the considerable freedom of choice enjoyed by voters. These findings are useful because they indicate that elections were already politicised and participatory before 1832, and that the Reform Act furthered political commitment in a manner that would not otherwise have been possible. Indeed, reform made previous changes irreversible. ...read more.

Another important point is that there was less violence in May 1832 than in October 1831. Contemporaries noted this, and some feared a sinister plot, assuming that radicals were so well-disciplined they could hold themselves back in readiness for a popular outbreak at some later time. Place allowed this idea to spread. Again, perception mattered more than reality. Place advised his allies not to hold meetings in case these revealed that the popular movement was more divided than was generally supposed. Whig MPs and peers made much of the danger of unrest when addressing Parliament, as did Grey and the King in their correspondence. Though some feigned alarm only to persuade opponents of reform to give way, others genuinely feared revolution. The fear was expressed often enough, and not only in public arenas. Private letters and records include such expressions, and perhaps these reveal what people were really thinking at the time. For Grey and his colleagues, and for the King, one of the most disturbing aspects of the reform struggle was the manner in which popular pressure became focused with the rise of political unions. The fact that these bodies had such authority, and yet for so long were answerable only to themselves, was a new and alarming development. Grey repeatedly emphasised that the only way to take the wind from their sails was to carry the reform bill, and Lopatin (1991) and Ferguson (1960) have argued that there would have been no reform without them. Words and concepts to note: 'Hegemonic paternalism': a form of control by the 'natural leaders' of society; those who owned the land, that amounted to domination. Instrumentality: purpose served. Pollbooks: the records kept by returning officers of those who voted in particular constituencies. 1 ...read more.