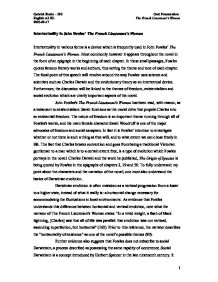 Intertextuality in John Fowles' The French Lieutenant's Woman Intertextuality in various forms is a device which is frequently used in John Fowles' The French Lieutenant's Woman. Most commonly however it appears throughout the novel in the form of an epigraph in the beginning of each chapter. In these small passages, Fowles quotes famous literary works and authors, thus setting the theme and tone of each chapter. The focal point of this speech will revolve around the way Fowles uses science and scientists such as Charles Darwin and the evolutionary theory as an intertextual device. Furthermore, the discussion will be linked to the themes of freedom, existentialism and social evolution which are utterly important aspects of the novel. John Fowles's The French Lieutenant's Woman has been read, with reason, as a testament to existentialism: Sarah functions as the moral drive that propels Charles into an existential freedom. The nature of freedom is an important theme running through all of Fowles's works, and his main female character Sarah Woodruff is one of the major advocates of freedom and social escapism. In fact it is Fowles' intention to investigate whether or not there is such a thing as free will, and to what extent we can chose freely in life. The fact that Charles breaks convention and goes from being a traditional Victorian gentleman to a man which is to a certain extent free, is a type of evolution which Fowles portrays in the novel. ...read more.

Fowles uses his characters to illustrate one of the epigraphs to the third chapter from The Origin of Species, which states that "the chief part of the organization of every living creature is due to its inheritance" (15). We find Mrs. Poulteney betraying a certain duplicity; for she depicts the extravagant pomposity of the late Victorian period while maintaining characteristics that are from her Puritan ancestors: "With the vicar Mrs. Poulteney felt herself with two people. One was her social inferior, an inferior who depended on her for many of the pleasures of his table; [...] and the other was the representative of God, before whom she had metaphorically to kneel. So her manner with him took often a bizarre and inconsequential course. It was de haut en bas one moment, de bas en haut the next; and sometimes she contrived both positions all in one sentence" (24). Perhaps Mrs. Poulteney can be described in existential terms as behaving "inauthentically" Still looking at the characters of the novel it is interesting to see the way Ernestina evolves throughout the novel. Ernestina represents the evolving economy and fashion, while still remaining an archaic species when it comes to female sexuality and the New Woman. For "whenever the physical female implications of her body, sexual, menstrual, parturitional, tr[y] to force an entry into her consciousness," she simply tells herself, "I must not" (29). ...read more.

This story I am telling is all imagination. These characters I create never existed outside my own mind. If I have pretended until now to know my characters' minds and innermost thoughts, it is because I am writing in (just as I have assumed some of the vocabulary and 'voice' of) a convention universally accepted at the time of my story: that the novelist stands next to God. He may not know all, yet he tries to pretend that he does. But I live in the age of Alain Robbe-Grillet and Roland Barthes; if this is a novel, it cannot be a novel in the modern sense of the word" (80). The narrator seems to imply that modern novels, despite their rejection of convention, cannot help but contain, like his, some part of their ancestry known as convention, hearkening again to the epigraph of the third chapter, which states that "the chief part of the organization of every living creature is due to its inheritance" (15). In conclusion, the intertextual allusions to Darwin and his evolutionary theories are essential when looking at the character development in The French Lieutenant's Woman. All of the characters evolve from one aspect and to a certain extent some characters such as Chalres, do truly break free from convention but in the same time they have to experience the aftermaths of their acts. Gabriel Iliesiu - IB2 Oral Presentation English A2 HL The French Lieutenant's Woman 2003-09-17 1 ...read more.