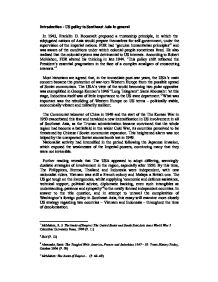 Introduction - US policy to Southeast Asia in general In 1943, Franklin D. Roosevelt proposed a trusteeship principle, in which the subjugated nations of Asia would prepare themselves for self-government, under the supervision of the imperial nations. FDR had 'genuine humanitarian principles'1 and was aware of the conditions under which colonial people sometimes lived. He also realised that the colonial system was detrimental to US interests. According to Robert McMahon, FDR altered his thinking in late 1944. 'This policy shift reflected the President's essential pragmatism in the face of a complex amalgam of crosscutting interests.'2 Most historians are agreed that, in the immediate post-war years, the USA's main concern became the protection of war-torn Western Europe from the possible spread of Soviet communism. The USA's view of the world becoming two polar opposites was exemplified in George Kennan's 1946 "Long Telegram". Sami Abouzahr: 'at this stage, Indochina itself was of little importance to the US state department.'3What was important was the rebuilding of Western Europe on US terms - politically stable, economically vibrant and militarily resilient. The Communist takeover of China in 1949 and the start of the The Korean War in 1950 exacerbated this fear and heralded a new intensification in US involvement in all of Southeast Asia, as the Truman administration became convinced that the whole region had become a battlefield in the wider Cold War, its countries perceived to be threatened by Chinese / Soviet communist expansion. This heightened alarm was not helped by the unexpected Soviet atomic bomb test in 1949. Nationalist activity had intensified in the period following the Japanese invasion, which exposed the weaknesses of the Imperial powers, convincing many that they were not invincible. Further reading reveals that The USA appeared to adopt differing, seemingly dualistic strategies of involvement in the region, especially after 1950. By this time, The Philippines, Burma, Thailand and Indonesia were independent, with new nationalist rulers. ...read more.

Short: 'A Threat was perceived [by the US]: a co-ordinated, Kremlin directed offensive.'25 In reality, far from receiving directions from the Kremlin as the Southeast Asian section of a global communist collaboration, Ho's relations with China and the USSR were 'often fractious'26and far from being a Soviet controlled singular offensive, the different insurgencies, whose objectives varied, were actually homegrown in their respective countries. But from around 1950 - and from this "black-and-white" perspective - the US could view their actions in South East Asia not as supporting colonialism, but as implementing a pre-emptive containment policy, protecting vulnerable nations from the encroachment of global communism not only in Western Europe, but also in South East Asia, protecting trade links and US military bases in the area. Also, the USA's 'first line of defence in the Pacific', i.e. Japan and the Philippines, appeared threatened by a "communist" victory in South East Asia. The region, therefore, needed defending against this menace, and Indochina was regarded as key to that defence. The domino theory 'quickly became an article of faith'.27In 1950, after assessment of all this, US neutrality - such as it was up to this time - was effectively ended. US intervention was requested at Dien Bien Phu, but despite Dwight D. Eisenhower being 'no less inclined than Truman had been to see the French struggle as an extension of America's Cold War effort', this was turned down by Congress, although seriously considered by Secretary of State John Foster Dulles. Instead, Congress 'insisted that France had to pledge to move swiftly to grant Vietnam independence'.28 Dulles would have preferred the French to continue fighting. Indonesia There was a marked difference in US policy between Indonesia and Indochina, mainly because Sukarno's Indonesian Republican movement was "anti-communist". This was in contrast to the Viet Minh which, if not a dyed-in-the-wool communist organisation, was certainly coloured with communism. This and their links with China, plus the fact that their leader had visited Moscow was enough to convince the Americans, who as we have seen, regarded Ho as a Soviet agent. ...read more.

It shows anti-colonial sentiments -The US hoped that France would end their ruling of Indonesia, but are prepared to support them for the time being in the immediate goal of "restoring security", i.e. fighting communism. It is significant that Acheson mentions this first, indicating US priorities. In the longer term, "genuine nationalism" should prevail, i.e. moderate, pro-Western, "democratic" nationalism. This section of the speech also highlights the US perception that the insurgency in Indochina was part of a wider, "imperialist" strategy, controlled by the Soviet Union. Acheson's speech concerns Vietnam, but these sentiments could be applied to any country in the region whose nationalist movement contained traces of "communism". 21 Logevall: The Origins... (P. 17) 22 Kalb and Abel: Roots of Involvement... (P. 55) 23 Logevall: The Origins... (P. 20) 24 Herring: America's Longest War... (P. 13) 25 Short, A: The Origins of the Vietnam War Longman, 1989 (P. 73-74) 26 Logevall: The Origins... (P. 20-21) These US fears were almost certainly unfounded. On a visit to Moscow in 1950, Ho was given a less-than-warm reception from Stalin. Evidence indicates that the Soviet leader was much less concerned with Southeast Asia than he was with Europe at the time. Also, despite receiving Military aid and sanctuary for Viet Minh troops from the Chinese, Ho preferred to keep them 'at arms length'; he would not have welcomed Chinese interference in Viet Minh internal affairs. It could be fair to describe the Viet Minh as "nationalists first, communists second". 27 Quotes in this paragraph from: Herring: America's Longest War... (P. 16-17) 28Quotes in this paragraph from: Logevall: The Origins... (P. 21-22) 29 Rotter: The Path to Vietnam... (P. 82) 30 Adereth, M: The French Communist Party: A Critical History (1920 - 84) Manchester University Press, 1984 (P. 139) 31 Groen, Petra M. H: Militant Response: The Dutch use of Military Force and the Decolonisation of the Dutch East Indies 1945 - 50 in: The Journal of Imperial and Commonwealth History Vol. XXI, no. 3, (1993) (P. 32) 32 Ibid (P. 34) Also, in Marshall Aid as a Catalyst... ...read more.