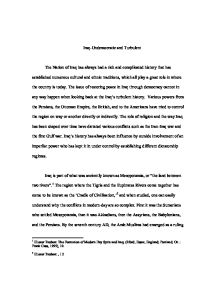 Iraq-Undemocratic and Turbulent The Nation of Iraq has always had a rich and complicated history that has established numerous cultural and ethnic traditions, which all play a great role in where the country is today. The issue of restoring peace in Iraq through democracy cannot in any way happen when looking back at the Iraq's turbulent history. Various powers from the Persians, the Ottoman Empire, the British, and to the Americans have tried to control the region on way or another directly or indirectly. The role of religion and the way Iraq has been shaped over time have dictated various conflicts such as the Iran-Iraq war and the first Gulf war. Iraq's history has always been influence by outside involvement of an imperlist power who has kept it in under control by establishing different dictatorship regimes. Iraq is part of what was anciently known as Mesopotamia, or "the land between two rivers".1 The region where the Tigris and the Euphrates Rivers come together has come to be known as the 'Cradle of Civilization,'2 and when studied, one can easily understand why the conflicts in modern-day are so complex. First it was the Sumerians who settled Mesopotamia, than it was Akkadians, then the Assyrians, the Babylonians, and the Persians. By the seventh century AD, the Arab Muslims had emerged as a ruling force and the Abbasid dynasty. ...read more.

Saddam then was forced to flee the country in order to stay alive, and Qasim reacted by ruthlessly suppressing the activities of the Baath and other Nationalist parties. Qasim's self alienation from both the Communists and the Nationalists, and his desire for a complete monopoly of power earned him the nick-name of the "sole-leader," and resulted in isolating him from all domestic support so that when the Kurds eventually turned on Qasim and revolted 1961, he had nobody to turn to for support.18 At the same time that all out fighting broke out between Kurdish guerrillas and the Iraqi army, there was an escalating conflict with the shah of Iran who was predominantly supported by the Western powers. The United States, Great Britain, as well as Iran, feared that communism would take over Iraq. In fact in April of 1959, Allen Dulles, the director of the United States Central Intelligence Agency (CIA), described the situation in Iraq "as the most dangerous in the world."19 In December of 1959, as a result of Iran's concern over the Shatt al Arab waterway and how communism would impact their borders, Qasim nullified the 1937 agreement, claimed the Shatt al Arab as Iraq's, and in to add to it all he claimed the newly independent sate of Kuwait as Iraqi territory.20 The Arab League accepted Kuwait as an independent state so Iraq severed ties with the Arab League and was left completely isolated, just the way Qasim seemed to want it. ...read more.

This action was seen as a sign of aggression by Iraq since the Iraqis had tried to raise oil prices through Opecs oil production costs.30 The Kuwait's had raised their petroleum output on insistence of the United States whose economy was also dependent on Arabian oil. The Kuwaiti government had willingly cooperated as the United States had protected its oil tankers during the Iran-Iraq war. Iraq launched the invasion of Kuwait and briefly occupied it before being driven out by an UN backed force led by the United States. Surprisingly, Saddam Hussein stayed in power as the UN backed force did not invade all the way into Iraq. The United States purposely refrained from invading Iraq in order to become the new imperialist power in the Middle East in order to keep Saudi Arabia, Kuwait, and other Arab states fearful of Saddam. In creating this fear, the United States was able to keep troops in the oil rich countries such as Saudi Arabia, Kuwait, and various Gulf States. By tracing Iraq's history it is evident both religion and the way the Middle East has been drawn up greatly influenced different situations both internally and externally. Iraq's different ethnic divisions of the Shia and Sunni faith plus the intervention of imperialist powers creates an unstable country where democracy cannot be achieved. ...read more.