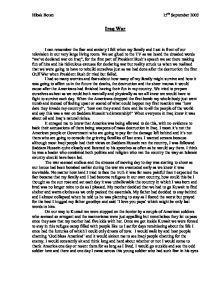 Iraq War I can remember the fear and anxiety I felt when my family and I sat in front of our television in our very large living room. We sat glued to the TV as we heard the dreaded words "we've declared war on Iraq", for the first part of President Bush's speech we sat there making fun of him and his ridiculous excuses for declaring war but reality struck us when we realized that we were going to have to rebuild ourselves just as we had done after the destruction the first Gulf War when President Bush Sr tried but failed. I had so many worries and fears about how many of my family might survive and how it was going to affect us in the future the deaths, the destruction and the sheer trauma it would cause after the Americans had finished having their fun in my country. ...read more.

I think he was a leader who combined both politics and religion who ran the country the way an Islamic country should have been led. The war seemed endless and the stresses of moving day to day was starting to show as our house had been bombed earlier during the war we evacuated early as we knew it was inevitable. No matter how hard I tried to face the truth it was far more painful than I expected the fact became that my family and I had become refugees in our own country, how could this be I thought as the sun rose and set each day it was unbelievable the country in which I was born and bred was no longer mine to do as I pleased. My mother decided that we had to go Kuwait to find shelter and warm clothes as we only packed the essentials. ...read more.

I would go outside and see the odd soldier here and there and one day I came across this young soldier who had such fear in his eyes that, I would sympathise so much that I would nearly approach him and tell him that its alright but I thought to myself I have no understanding of what he might fear so leave him to be because it was not his fault he was here it was his job his duty. I would sit and wonder about teachings and sayings that my father would say to me and the one that stood most bold in my mind was 'only the wearer knows where the shoe pinches' I felt I could relate to it as only I knew what was going on in my mind and I was the only person who knew how to cope with it. Although in reality that was not the case. Hibak Botan 15th September 2003 ...read more.