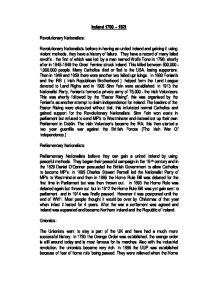 Ireland 1790 1921. How different groups viewed the division of Ireland.

Ireland 1790 - 1921 Revolutionary Nationalists: Revolutionary Nationalists believe in having an untied Ireland and gaining it using violent methods, they have a history of failure. They have a record of many failed revolt's . the first of which was led by a man named Wolfe Tone in 1798, shortly after in 1845-1849 the Great Famine struck Ireland. This killed between 500,000- 1,000,000 people. Many Catholics died or fled to the USA, losing supporters. Then in 1848 and 1858 there were another two failed uprisings. In 1880 Fenian's and the IRB ( Irish Republican Brotherhood ) helped form the Land League devoted to Land Rights and in 1905 Sinn Fein were established. In 1913 the Nationalist Party, Fenian's formed a private army of 75,000- the Irish Volunteers. This was shortly followed by the "Easter Rising", this was organised by the Fenian's as another attempt to claim independence for Ireland. ...read more.

In 1893 the Home Rule was debated again but thrown out but in 1912 the Home Rule Bill was yet gain sent to parliament and in 1914 was finally passed. However it was postponed until the end of WW1. Most people thought it would be over by Christmas of that year when infact it lasted for 4 years. After the war a settlement was agreed and Ireland was separated and became Northern Ireland and the Republic of Ireland. Unionists: The Unionists want to stay a part of the UK and have had a much more successful history. In 1793 the Orange Order was established, the orange order is still around today and is most famous for its marches. Also with the Industrial revolution, the unionists became very rich. In 1886 the UUP was established because of fear of home rule being passed. They were relieved when the Home Rule bill had been thrown out. ...read more.

They also believed that they would be able through time to gain control of Northern Ireland, however this has never happened. Revolutionary Nationalists although they would be mildly happy about gaining control of the south, they would still be upset as they wanted the whole of Ireland and they knew they would never gain control of it. Unionists would have been deeply upset by the loss of the south; they did everything they could to keep the whole of Ireland part of the UK. However at least with Northern Ireland being a separate country they were no longer the minority but the majority. The British Government would be upset that they lost Ireland and the money they got from it but they would still be happy that the violence was solved for a short while. However when the government changed their views would change because the Whigs desperately wanted Ireland o stay under British Control no matter what. ...read more.