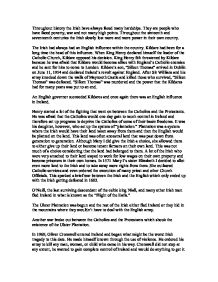 Ireland. Throughout the sixteenth and seventeenth centuries the Irish slowly lost more and more power in their own country.

Throughout history the Irish have always faced many hardships. They are people who have faced poverty, war and not many high points. Throughout the sixteenth and seventeenth centuries the Irish slowly lost more and more power in their own country. The Irish had always had an English influence within the country. Kildare had been for a long time the head of this influence. When King Henry declared himself the leader of the Catholic Church, Kildare opposed his decision. King Henry felt threatened by Kildare because he was afraid that Kildare would become allies with England's Catholic enemies and he sent for him to come to London. Kildare's son, "Silken Thomas" arrived in Dublin on June 11, 1954 and declared Ireland's revolt against England. After Sir William and his army knocked down the walls of Maynooth Castle and killed those who survived, "Silken Thomas" was defeated. "Silken Thomas" was murdered and the power that the Kildares had for many years was put to an end. ...read more.

In 1571 Mary I's sister Elizabeth I decided to allot even more land to the Irish and to take away more rights from them. She outlawed Catholic services and even ordered the execution of many priest and other Church Officials. This sparked a brief war between the Irish and the English which only ended up with the Irish getting defeated in 1603. O'Neill, the last surviving descendant of the celtic king Niall, and many other Irish men fled Ireland in what is known as the "Flight of the Earls." The Ulster Plantation was begun and the rest of the Irish either fled Ireland or they hid in the mountains where they wouldn't have to deal with the English army. Another war broke out between the Catholics and the Protestants which shook the existence of the Ulster Plantation. In 1969, Oliver Cromwell entered Ireland and began what might be the worst Irish tragedy to this date. He made himself known through the use of violence. ...read more.

The Penal Laws basically took away any of the freedoms that the Irish once had. They were not allowed to take part in anything to do with Parliament, attend universities, or even own a horse that weighed more then five pounds. These laws stripped the Irish of basic civil rights. As a result of these struggles by the time Ireland reached the 1700's only seven percent of it's land was owned by the Irish. England had the predominant ruling in Ireland and the Irish had no rights at all. They were prisoners in their own land, a land where their ancestors had once lived. Throughout the centuries Ireland faced many new struggles with no really high points to show for itself. Within Ireland there were different groups of people, those who left when things were getting tough, those who were forced to leave, and those brave people that chose to stay. It shows great loyalty to stay in a country that was so poverty stricken. Throughout these two centuries it is amazing that these people did not give up trying to get their country back under their control. ...read more.