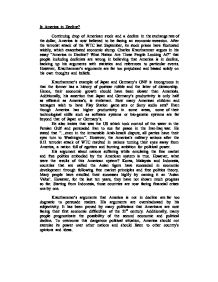 Is America in Decline? - assessing America after September 11th

Is America in Decline? Continuing drop of American stock and a decline in the exchange rate of the dollar, America is now believed to be facing an economic recession. After the terrorist attack of the WTC last September, its stock prices have fluctuated widely, which exacerbated economic slump. Charles Krauthammer argues in his essay "America in Decline? What Nation Are These People Looking At?" that people including declinists are wrong in believing that America is in decline, backing up his arguments with statistics and references to particular events. ...read more.

How many American children and teenagers wish to have Play Station game sets or Sony audio sets? Even though America has higher productivity in some areas, some of their technological skills such as software systems or bio-genetic systems are far beyond that of Japan or Germany's. He also insists that was the US which took control of the water in the Persian Gulf and persuaded Iran to sue for peace in the Iran-Iraq war. He stated that "...even in the intractable Arab-Israeli dispute, all parties have their eyes turn to Washington.". ...read more.

Many people have extolled their successes highly by naming it an 'Asian Value'. However, for the last ten years, they have not shown much progress so far. Starting from Indonesia, those countries are now facing financial crises one by one. Krauthammer's arguments that America is not in decline are far too dogmatic to persuade readers. His arguments are overshadowed by his subjectivity. It has been proved by many politicians that Americans are now facing their first economic difficulties of the 21st century. Additionally, many people prognosticate the possibility of the second economic and political decline. To overcome this dangerous political situation, America should not exercise its power over other nations and should listen to other country's opinions and ideas. ...read more.