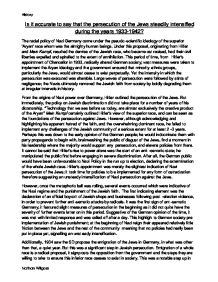 Is it accurate to say that the persecution of the Jews steadily intensified during the years 1933-1942?

Is it accurate to say that the persecution of the Jews steadily intensified during the years 1933-1942? The racial policy of Nazi Germany came under the pseudo-scientific ideology of the superior 'Aryan' race whom was the almighty human beings. Under this proposal, originating from Hitler and Mein Kampf, resulted the demise of the Jewish race, who became ostracised, had their civil liberties expelled and spiralled to the extent of annihilation. This period of time, from Hitler's appointment of Chancellor in 1933, radically altered German society; vast measures were taken to implement the Aryan ideology and the government ensured that minority ethnic groups, particularly the Jews, would almost cease to exist perpetually. Yet the intensity in which the persecution was executed was alterable. Large waves of persecution were followed by stints of negligence; the Nazis ultimately removed the Jewish faith from society by boldly degrading them at irregular intervals in history. From the origins of Nazi power over Germany, Hitler outlined the persecution of the Jews. But immediately, the policy on Jewish discrimination did not take place for a number of years of his dictatorship. "Technology that we see before us today, are almost exclusively the creative product of the Aryan" Mein Kampf certainly outlined Hitler's view of the superior race, and can be seen as the foundations of the persecution against Jews. However, although acknowledging and highlighting his apparent hatred of the faith, and the overwhelming dominant race, he failed to implement any challenges of the Jewish community of a serious extent for at least 2-3 years. ...read more.

This was a notable step up in intensification; no longer were minor boycotts issues to the Jews, but now they were faced with the potential of mass emigration of the country which they had communally lived in for centuries. Proposing emigration undoubtedly sparked much furore from the Jewish community as although they had been susceptible to minor boycotting of business, they were seemingly oblivious to the deportation measures society began to inflict upon them. This was undoubtedly the most significant persecution idea to date; it highlighted the real beginning of the Nazi plan of a superior, Aryan state. Because of the suddenness of the proposition, it seems to be evidence that certainly any plans for emigration of Jews was fluctuating, with this instance being a particular spike in the situation. On top of this, it soon became clear that the extent to which Nazi ideology despised the Jewish faith was elevating. The first inkling of such fate was the founding of 3 organisations, committed to the Jewish demise. Firstly there was the Law for the Protection of German Blood and Honour which forebode sex and marriage between Aryans and Jews. Also set up was the Reich Citizenship law - perhaps the most serious case of prosecution yet; removing Jews citizenship of Germany. Finally there was the Law for Protection of the Genetic Health of the German People - medical examination; classifying citizens of Aryan or Jewish make-up. ...read more.

95 synagogues were burned down, hundreds of homes were destroyed but what was more horrifying was the murder of 95 Jews and the 20,000 sent to prison camps. Again, sudden outbursts of violence suggest that perhaps what Hitler planned for was uncalculated chaos; the Nazis let the environment and circumstances determine policy and the Jewish oppression would coincide, and eventually their ultimate one race state would be created. But the Night of the Broken Glass certainly reinforced the idea that any signs of was a gradual, calculated, steady intensification was unapparent; it was infrequent outbursts of organisations and violence against the Jews instead. To summarise, it can certainly be said that during the period 1933-1942, Adolf Hitler and the Nazi Party embarked on a mission to exterminate the Jews, first shown in Mein Kampf, but their methodology in doing so was often irregular and unsteady. As opposed to the gradual degrading of the Jews, Hitler's furious speeches infuriating the public and the set-up of organisations in spur of the moment time frames was more common. Between the anti-Semitism there were significant gaps of loosening the noose on the community, the Olympics a particular time whereby Germany temporarily wiped away their recent history threatening to ostracize Jewish people purely in order to seem to remain under the constraints of the Treaty of Versailles. Ultimately, Hitler's oppression of the Jews intensified undoubtedly; but the intervals in which he persecuted them and the methodology behind it was certainly not steady. ?? ?? ?? ?? History Nathan Wilgoss ...read more.