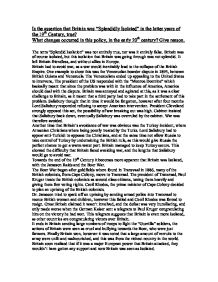 Is the assertion that Britain was &quot;Splendidly Isolated&quot; in the latter years of the 19th Century, true?

Is the assertion that Britain was "Splendidly Isolated" in the latter years of the 19th Century, true? What changes occurred in this policy, in the early 20th century? Give reason. The term "Splendid Isolation" was not entirely true, nor was it entirely false. Britain was of course isolated, but this isolation that Britain was going through was not splendid. It left Britain friendless, and without allies in Europe. Britain had to avoid war, as a war would inevitably lead to the collapse of the British Empire. One example to show this was the Venezuelan boarder dispute in 1895, between British Guiana and Venezuela. The Venezuelans ended up appealing to the United States to intervene, The president of the US responded with the "Monroe Doctrine" which basically meant that since the problem was with in the influence of America, America should deal with the dispute. ...read more.

Britain managed to keep Turkey secure. This showed the difficulty that Britain faced avoiding war, and the lengths that Salisbury would go to avoid war. Towards the end of the 19th Century it becomes more apparent that Britain was Isolated, with the Jameson Raids and the Boer War. The Boer War began after goldfields where found in Transvaal in 1886, many of the British colonists, from Cape Colony, move to Transvaal. The president of Transvaal, Paul Kruger treats the British colonists as second class citizens, taxing them heavily and giving them few voting rights. Cecil Rhodes, the prime minister of Cape Colony decided to plan an uprising of the British colonists. Dr. Jameson tried to spark off an uprising by sending armed police into Transvaal to rescue British women and children, however this failed and Cecil Rhodes was forced to resign. ...read more.

Britain soon realised that if it was a major European power that Britain attacked, they wouldn't have gotten any support and now Britain was seen as Isolated. In the 20th century Lord Salisbury resigned as the Foreign Secretary, and there appears to be a change in the Foreign policy as Alliances are signed one with Japan, and then the Entente Cordial with France and the Anglo-Russian Entente. However two of these are not alliances but colonial agreements. The only one promising to go to war was the Anglo-Japanese Alliance, but that is only if Japan is attacked by coalition forces. Therefore there isn't a great change in Britain's policies more a continuation, but with the variation of no more disputes in Africa. The reasons for these changes is purely after the Boer war when Britain began to realise it was a Isolated power and it needed allies to support it. ?? ?? ?? ?? ...read more.