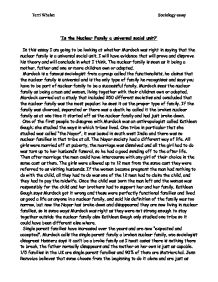 Is the Nuclear Family a universal social unit?

The average family size now is 1.9 were as years ago it used to be 2.4. People decide now to just have a relationship with someone but not have any kids they are called DINKIES - Double income no kids. If they want to have children they will. Toffler believes that cutting the family down to the elemental components will prove more efficient at navigating through educational and social shoals. Murdock doesn't even see a married couple or just a couple with no kids as a family, to be family there has to be children in the picture. Some people wish to be in a family but don't desire to have any children as they want to concentrate on there career and don't think it would be fair to have a child or just don't want to have children. People who are child free are choosing not to have children by choice whereas people who are child less want children but can't have them. There is an issue arising now about Homosexual couple becoming parents. Murdock doesn't see this as socially acceptable but as we go forward this type of family is on the increase. Now homosexuals are socially accepted and can now get married from 2005 the civil contract allows homosexual couples to get married this ...read more.

He tried to weaken the nuclear family and made it so marriage was less of an issue; it was easier to divorce, made contraception available, made abortion legal and introduced free childcare. From 1917 to the 1930's there was a higher level of Juvenal crime in the younger generation, the reason for this was thought to be that the family wasn't around to guide them, the birth rate also dropped, so Lenin changed back to the way it was before. This helped Murdock prove his point that the nuclear family was the strongest; it showed how important it was. Orphanages are trying to make up a form of the nuclear family as they feel it is the strongest form of family this again supports Murdock's theory. To conclude I feel that Murdock was right the nuclear family is the strongest form of family but I feel that what he sees as a nuclear family is too narrow there are may forms that he has forgotten about like fostering, homosexual couples and alternative families. I see these as a family and believe they are as strong as the stereotypical 2.4 families. There were many attempts to prove Murdock wrong but in the end they disappeared or went to being a nuclear family, which therefore shows it is the strongest type of family. ?? ?? ?? ?? Terri Whelan Sociology essay ...read more.