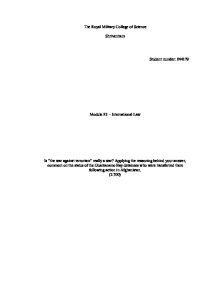 Is &quot;the war against terrorism&quot; really a war? Applying the reasoning behind your answer, comment on the status of the Guantanamo Bay detainees who were transferred there following action in Afghanistan.

The Royal Military College of Science Shrivenham Student number: 044179 Module F3 - International Law Is "the war against terrorism" really a war? Applying the reasoning behind your answer, comment on the status of the Guantanamo Bay detainees who were transferred there following action in Afghanistan. (2.700) "Our war on terror will be much broader than the battlefields and beachheads of the past. The war will be fought wherever terrorists hide, or run, or plan." US President George W. Bush, September 29, 2001 Within 24 hours after the planes with terrorists on board hit the World Trade Centre and the Pentagon on September 11, 2001 the US President George W. Bush announced that the attacks were "more than acts of terror. They were acts of war". The US response was to declare 'a different kind of war against a different kind of enemy', a world-wide "war on terror"1. This language extends the meaning of the word "war". "War," of course, has been invoked rhetorically to illustrate campaigns against unlawful groups such as drug cartels or the Mafia. However, such campaigns in fact are generally coordinated efforts at law enforcement, even where military means are employed. In the meantime, Mr. Bush, seems to consider "the war on terror" quite literally, as a traditional war, thus creating serious troublesome implications. For instance, in G.W. Bush's view, the US administration's argument that there is a state of war between al Qaeda and the USA is fairly justified because of the magnitude of al Qaeda's attacks on September 11, 2001, its terror campaign against the American embassies in Kenya and Tanzania, its attack on the U.S.S. ...read more.

the status of both al Qaeda and the Taliban, which appear to be the most controversial actors within so-called "war against terror". Given the above-mentioned arguments concerning the scope of application of the law of war to "war on terror", it is reasonable to argue that neither Taliban nor al Qaeda reserve the right to be treated as legitimate subjects within the legal framework of International law and particularly jus in bello. Although al Qaeda had its headquarters in Afghanistan, and was supported by the Taliban "government", the latter had not achieved the necessary recognition as the government of the country. The fact that the Taliban's administration was recognised by only Pakistan, Saudi Arabia and the United Arab Emirates cannot clarify the Taliban's international status. In addition, such recognition had symbolic and temporary character, because these countries have ceased their diplomatic relations shortly after the events of 9/11. The only administration of Afghanistan legitimately recognised by the UN was the United Islamic Front for the Salvation of Afghanistan, widely known as the Northern Alliance. Therefore, the Taliban was not the legitimate authority of Afghanistan but instead was a group in possession of much of its territory. As soon as the Taliban administration rejected a demand that they imprison Osama bin Laden and hand him over to the United States for trial and punishment, the American authorities decided to engage in self-help, invading Afghanistan on 7 October 2001.8 The attacks against the Pentagon and the World Trade Centre were clear threats to the sovereignty and national security of the USA. ...read more.

By contrast, al Qaeda detainees constituted irregular forces16 who failed to wear uniforms and who did not respect the jus in bello. Some evidences also available concerning Taliban's failure to respect the laws of war, even before the beginning of counter-terrorist military operation. The Taliban fighters were involved in massive crimes against humanity by beheading and killing prisoners and massacring thousands of civilians in different parts of the country. In 1998 and 1999 the International Red Cross reported that the Taliban and their non-Afghan army killed thousands of civilians in Bamiyan and set fire to 8.000 houses and shops.17 As it was in the case of counter-terrorist military operations there is no formal legal category for the status of Guantanamo Bay detainees as well. Given the uncertainties regarding the proper status and treatment of Guantanamo Bay detainees who were involved in hostile activities in various ways, but also failed to meet the criteria for POW status, they are more likely to be called "unlawful combatants".18 They could be defined as individuals who are either members of the armed forces or persons who take an active part in hostilities, but not conducting their operations in accordance with laws and customs of war. However, in this case in order to better define the status of these detainees, a competent tribunal should be established, which could find a form of a military commission.19 Status, though is only part of controversy. Whatever the status of the Guantanamo Bay detainees, they always reserve a right to humane treatment under customary international law.20 Thus, accepting that there are difficulties in applying international regulations in the special circumstances of "the war on terror", the attempt should nevertheless be made to apply the law to the maximum extent possible. ...read more.