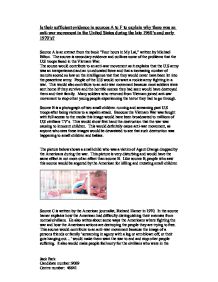 Is their sufficient evidence in sources A to F to explain why there was an anti-war movement in the United States during the late 1960's and early 1970's?

Is their sufficient evidence in sources A to F to explain why there was an anti-war movement in the United States during the late 1960's and early 1970's? Source A is an extract from the book "Four hours in My Lai," written by Michael Bilton. The source is secondary evidence and outlines some of the problems that the U.S troops faced in the Vietnam War. The source would contribute to an anti-war movement as it explains that the U.S army was an inexperienced and an un-educated force and that a increasing number of recruits scored so low on the intelligence test that they would never have been let into the peacetime army. People of the U.S would not want a rookie army fighting in a war. ...read more.

The picture below shows a small child who was a victim of Agent Orange dropped by the Americans during the war. This picture is very disturbing and would have the same effect is not more of an effect than source B. Like source B, people who saw this source would be angered by the American for killing and mutating small children Source C is written by the American journalist, Richard Hamer in 1970. In the source hamer explains how the American had difficulty distinguishing their enemies from normal civilians. He also writes about some ways the Americans where fighting the war and how the Americans actions are destroying the people they are trying to free. This source would contribute to an anti-war movement because the image of a persons friends or family 'screaming in agony with a leg or arm blown off, or their guts hanging out...' ...read more.

Source E is a statement made by a BBC representative to the Royal United Service Institute during the war. The source explains how American saw the war from their TVs. They saw shocking and disturbing images. The statement was made in front of some of the armed forces. The statement would make the armed forces feel ashamed that the killing they have done may have been seen be young children or their own families. This source bellow is a famous image of a suspected Vietcong guerrilla being killed by the Vietnamese national police chief. This image was published all over America in 1969. This is only one of many images that were published in America due to the freedom of media access. This was the main image that immediately changed the American publics views on the way. Jack Park Candidate number: 9069 Centre number: 46641 ...read more.