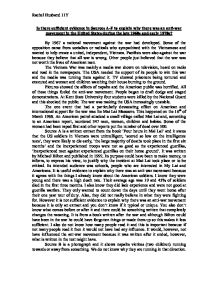 Is there sufficient evidence in Sources A-F to explain why there was an anti-war movement in the United Statesduring the late 1960s and early 1970s?

Is there sufficient evidence in Sources A-F to explain why there was an anti-war movement in the United States during the late 1960s and early 1970s? By 1967 a national movement against the war had developed. Some of the opposition came from socialists or radicals who sympathized with the Vietnamese and wanted to help create a united, independent, Vietnam. Pacifists were also against the war because they believe that all war is wrong. Other people just believed that the war was not worth the lives of American men. The Vietnam War was mainly a media war shown on television, heard on radio and read in the newspapers. The USA needed the support of its people to win this war and the media was turning them against it. TV showed prisoners being tortured and executed and women and children watching their house burning to the ground. Pictures showed the affects of napalm and the American public was horrified. All of these things fueled the anti-war movement. People began to draft dodge and staged demonstrations. At Kent State University four students were killed by the National Guard and this shocked the public. The war was making the USA increasingly unstable. The one event that had a particularly devastating effect on American and international support for the war was the Mai Lai Massacre. ...read more.

Its intended audience was the US public and this would have an influence on the anti-war movement in America. It is sufficient evidence to explain why there was an anti-war movement in the USA because it was at the time of the movement and it fueled it. It is primary evidence and this is important, as if it was not then it could not have contributed to the movement. However we do not know who or how many people saw it. This is a weakness because if not many people saw it then it would not have had much affect on the anti-war movement. It is also biased against the war and the US government so people may have not taken it seriously. Source D is a cartoon that was published in the British magazine punch in 1967. It shows the effects of President Johnson's war policy on the 'Great society'. You can see a train moving along and this is the US economy. The carriages are the great society but they are being chopped up and burnt in the fire on the train to fuel it. The 'great society' is fueling the US economy. 1967 is before the big anti-war movement and this means that it could have contributed to it. ...read more.

This appalled them and the effects lasted for generations. Another reason was guerilla tactics were frustrating and the war lasted for such a long time that soldiers started giving up hope of ever winning the war. People saw many civilian targets and this was not what they wanted. They saw houses being burnt in front of women and children; this killed many people. Drugs were one of the only things that kept GI's going and amphetamines were used to keep the troops awake at night. Drugs were not popular and this would have increased the anti-war movement. The war was costing $20 billion a year, the taxes in America had to be increased, this annoyed the American public, and this made America even more anti-war. A major reason for the anti-war movement in America was the failure of the Tet offensive. It convinced the American people that this was a war they could not win. This was the major turning point in the anti-war movement and strengthened it dramatically and I believe this is the most important reason why there was an anti-war movement. I believe there is sufficient evidence in Sources A to F to explain why there was an anti-war movement in the United States in the late 1960s and early 1970s. However, there were many reasons that were not mentioned in the sources and all the reasons are important. 2280 words ?? ?? ?? ?? Rachel Husband 11Y ...read more.