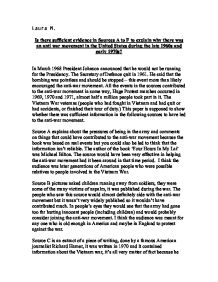 Is There Sufficient Evidence In Sources A-F To Suggest Why There Was An Anti-War Movement?

Laura M. Is there sufficient evidence in Sources A to F to explain why there was an anti war movement in the United States during the late 1960s and early 1970s? In March 1968 President Johnson announced that he would not be running for the Presidency. The Secretary of Defence quit in 1961. He said that the bombing was pointless and should be stopped - this event more than likely encouraged the anti-war movement. All the events in the sources contributed to the anti-war movement in some way, Huge Protest marches occurred in 1969, 1970 and 1971, almost half a million people took part in it. The Vietnam War veterans (people who had fought in Vietnam and had quit or had accidents, or finished their tour of duty.) This paper is supposed to show whether there was sufficient information in the following sources to have led to the anti-war movement. Source A explains about the pressures of being in the army and comments on things that could have contributed to the anti-war movement because the book was based on real events but you could also be led to think that the information isn't reliable. ...read more.

This article shows people what it was like in Vietnam, and how the American soldiers were in a dilemma because they didn't know who the enemy was. The second paragraph is questioning their actions. It shows the war in a bad light, a lot of people read it, and relied on newspapers rather than television since it was a rather new invention. The audience would have been anyone who picked up a newspaper in that time, and it would have travelled by word of mouth as well. Source D was published in a British magazine called "Punch" in 1967. It's meaning is that the 'great society' that the President had promised had in effect gone up in smoke. It was heading towards disaster. This piece wouldn't have had a big effect on the anti-war movement in America but it would have been a different story in England because I imagine a lot of people read it. The cartoon pictured in Source D criticises the American government and emphasises the fact that they're wasting money on a pointless cause. ...read more.

But seeing as it was a film we don't know whether we can trust its accuracy and it might have been exaggerated, the point of view was also mostly from an old army veteran so he was biased. I think there is enough evidence in these sources to suggest that they all helped in the anti war movement, in one way or another most detail events that happened in the Vietnam war, and protests were constantly happening in America. Some of the sources would have been incredibly beneficial to the anti-war movement had they been seen at the right time. There isn't enough evidence as well because we don't know the amount of people who read these sources and some of them we don't know exactly where they were published. Over all though I think these events/sources added to the anti-war movement they all show bad things that have gone on, on both sides and in the end everyone just wants the blood shed to stop. Laura M. ...read more.