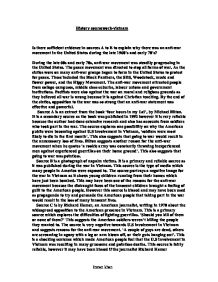 Is there sufficient evidence in sources A to E to explain why there was an anti-war movement in the United States during the late 1960's and early 70's?

History coursework-vietnam Is there sufficient evidence in sources A to E to explain why there was an anti-war movement in the United States during the late 1960's and early 70's? During the late 60s and early 70s, anti-war movement was steadily progressing in the United States. The peace movement was directed to stop all forms of war. As the sixties wore on many anti-war groups began to form in the United States to protest for peace. These included the Black Panthers, the SDS, Woodstock, music and flower power, and the Hippy Movement. The anti-war movement attracted people from college campuses, middle class suburbs, labour unions and government institutions. Pacifists were also against the war on moral and religious grounds as they believed all war is wrong because it is against Christian teaching. By the end of the sixties, opposition to the war was so strong that an anti-war statement was effective and powerful. Source A is an extract from the book 'four hours in my Lai', by Michael Bilton. ...read more.

This may have been one of the reasons for the anti-war movement because the distraught faces of the innocent children brought a feeling of guilt to the American people. However this source is biased and may have been used as propaganda to try and persuade the American people that taking part in the war would result in the loss of many innocent lives. Source C is by Richard Hamer, an American journalist, writing in 1970 about the widespread opposition to the American presence in Vietnam. This is a primary source which explores the difficulties of fighting guerrillas. 'Should you kill of them or none of them?' This suggests the American soldiers weren't killing the people they wanted to. The source is very negative towards U.S involvement in Vietnam and suggests reasons for the anti-war movement. 'A couple of guys are dead, others are screaming in agony with a leg or arm blown off, or their guts hanging out'. This is a shocking sentence which made American people feel that the U.S involvement in Vietnam was resulting in many gruesome and pointless deaths. ...read more.

It is a primary source and is very reliable. This source suggests another reason for why the American public were becoming against the American involvement due to the fact that media were making the deaths and casualties look a lot more gruesome. 'Blood looks very red on the colour television screen'. At this time of the war technology had advanced and many people had colour televisions and could see the real horrors of the war. Many families who had sent their boys to Vietnam wanted them back safely because the dead bodies shown on the TV could be one of their loved ones. So overall I think that sources A to E give sufficient evidence to explain why there was an anti-war movement in the U.S during the late 1960's and early 70's because they are all valid and very reliable. They also explore all the different reasons which could have sparked an anti-war movement. The sources suggest that the anti-war movement mainly began when the American public became aware of what was actually going on in Vietnam. This was due to anti-war propaganda. ?? ?? ?? ?? Imran khan ...read more.