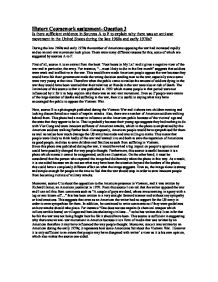 History Coursework assignment- Question 3 Is there sufficient evidence in Sources A to F to explain why there was an anti-war movement in the United States during the late 1960s and early 1970s? During the late 1960s and early 1970s the number of Americans opposing the war had increased rapidly and so an anti-war movement took place. There were many different reasons for this, some of which are suggested by sources A to F. First of all, source A is an extract from the book 'Four hours in My Lai' and it gives a negative view of the war and in particular, the army. For instance, "...most likely to die in the first month" suggests that soldiers were weak and ineffective in the war. This would have made American people oppose the war because they would have felt their government made the wrong decision sending men to the war; especially since some were very young at the time. Therefore when the public came to realise the amount of soldiers dying in the war they would have been worried that their relatives or friends in the war were also at risk of death. The limitations of this source is that it was published in 1992 which means people in that period were not influenced by it for it to help explain why there was an anti-war movement. ...read more.

as he has written this I can infer that he felt the war was not being fought how he felt it should have been. This source is sufficient in suggesting why there was an anti-war movement in America because it is a form of media that was written by an American therefore it may have influenced the way people thought. Moreover, since it was written by an American during the early 1970s; it represents how some Americans felt about the Vietnam War. However it is only sufficient to an extent that people may have disagreed with writer' s view as it is his own opinion, which also makes the source one-sided. Another source expressing someone's opinion is source D which is a cartoon. It was published in the British magazine 'Punch' in 1967- period of anti-war movement in America. It is meant to show the effects of President Johnson's war policy on the 'Great Society'. That is his promise to the American public to improve education, medical care as well as feed and shelter the homeless. However a lot of the money that he planned to spend on his Great Society was instead spent on the war in Vietnam. ...read more.

In addition, it was written on a helmet which suggests it was written during the war, making its meaning more credible. As a result this source goes far in explaining why there was an anti-war movement in America because it represents the feelings of a GI- which in consequence could easily reflect the attitude of the American public, especially since they saw what took place in Vietnam through television. On the other hand it is limited because the GI may have only written this as a result of a bad incident at war which had startled and disturbed him at the time, yet faded in the long term. To conclude, I believe that there is sufficient evidence in sources A to F to explain why there was an anti-war movement in the United States during the late 1960s and early 1970s. I believe this because, together, sources A to F have a diverse range of reasons why the American public may have opposed the war and more importantly the sources were all written, produced, or distributed as a form of media. Hence it is media, it means that their contents, which all opposed the war, may have had a big influence on the American people and so lead them to act against the Vietnam War. By Yasmine Mohamed-Ali ...read more.