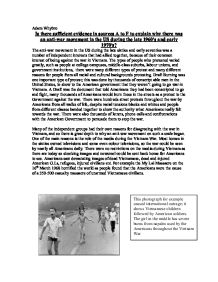 Adam Whybro Is there sufficient evidence in sources A to F to explain why there was an anti-war movement in the US during the late 1960's and early 1970's? The anti-war movement in the US during the late sixties and early seventies was a number of independent interests that had allied together, because of their common interest of being against the war in Vietnam. The types of people who protested varied greatly, such as people at college campuses, middle-class suburbs, labour unions, and government institutions, there were many different types of protest and many different reasons for people from all racial and cultural backgrounds protesting. Draft Burning was one important type of protest; this was done by thousands of conscript able men in the United States, to show to the American government that they weren't going to go war in Vietnam. A Draft was the document that told Americans they had been conscripted to go and fight, many thousands of Americans would burn these in the streets as a protest to the Government against the war. There were hundreds street protests throughout the war by Americans from all walks of life, despite racial tensions blacks and whites and people from different classes banded together to show the authority what Americans really felt towards the war. There were also thousands of letters, phone calls and confrontations with the American Government to persuade them to stop the war. ...read more.

Hamer goes on to give the horrific details of the tactics used by the US during the war. He does not however inform us of the types of horrific tactics that the Vietcong Guerillas used, such as the horrific booby traps they set for American patrols, which is biased against the war. The American tactics were dammed by much of the world as they were deemed as harsh; this was brought about by the media. The Americans used chemicals to destroy rainforests around the Ho Chi Minh trail and villages like Napalm and Agent Orange, which still has an effect on the Vietnam life today! Each new generation still suffers from the chemicals used in the military campaigns by the Americans during Vietnam. Source E is an oral statement by Robin Day a BBC commentator who says that TV has changed American views on war more than anything else, to be more anti-war and anti-militarist. Day says now people all over the world can watch conflicts on television, whether in the future a democracy which has uninhibited television coverage in every home will ever be able to fight a war again, as the full brutality of war will be there in close-up and in colour. Day also says, "Blood looks very red on the colour television screen". This source does not tell us anything about the war itself, or about the anti-war movement in America, but just how technology such as colour TV's have changed the war, and the views of the war by ordinary people. ...read more.

Therefore in 1967, 30 percent of black men who were the right age for the conscription were conscripted, whereas only 19 percent of whites were. There were many black protests and questions towards the government from black people included comments like "why should we fight a war that we don't believe in?" and "why are we fighting for a country that refuses to give us basic human rights?" Black opponents of the war were quick to point out that "the Vietcong never called us nigger!" Also in 1967, Martin Luther King, the best known of black civil rights campaigners, Adam Whybro spoke out against the war. A year later, King was assassinated by a white opponent of civil rights and there were hundreds of race riots all over the country. The sources are quite sufficient but they do not cover all explanations to why there was an anti-war movement in the US during the late 1960's and early 1970's. The best sources in my view are the picture of the 'Napalm Girl' and source C, as both these two sources show us the violent tactics the American armed forces used in Vietnam and with the disregard for human lives they were used. The two sources persuaded a lot of people to go against the war and join the anti-war movement. I feel it was because both are media items which was the main factor in there being such a large anti-war movement in America. ...read more.