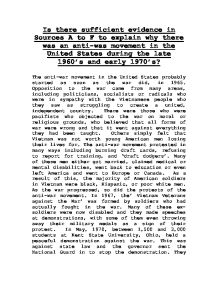 Is there sufficient evidence in Sources A to F to explain why there was an anti-was movement in the United Statesduring the late 1960's and early 1970's?

Is there sufficient evidence in Sources A to F to explain why there was an anti-was movement in the United States during the late 1960's and early 1970's? The anti-war movement in the United States probably started as soon as the war did, in 1965. Opposition to the war came from many areas, including politicians, socialists or radicals who were in sympathy with the Vietnamese people who they saw as struggling to create a united, independent country. There were those who were pacifists who objected to the war on moral or religious grounds, who believed that all forms of war were wrong and that it went against everything they had been taught. Others simply felt that Vietnam was not worth young American men losing their lives for. The anti-war movement protested in many ways including burning draft cards, refusing to report for training, and 'draft dodgers'. Many of these men either got married, claimed medical or mental disabilities, went back to education or even left America and went to Europe or Canada. ...read more.

The source speculates about the experience of the soldiers that were sent to Vietnam and their intelligence. It mentions the length of a tour of duty and how long soldiers were likely to be in Vietnam before they were killed. Although this extract contains facts about the soldiers that went to Vietnam, there is not enough evidence to explain why there was an anti-war movement. Source B: This source is a photograph which was taken of napalm victims during the Vietnam War. This photograph was not just published in America, but throughout the world, which showed people exactly what was happening in Vietnam. The photograph shows two young children running down the road and one, a little girl, has no clothes on. In the background there are photographers also taking pictures. This source shows how terrible weapons were being used that did not only injure or kill the enemy, but were also hurting innocent civilians. This photograph led to anti-war protestors singing a song - 'Hey, Hey, LBJ. ...read more.

There would have been members of the British armed forces in the audience. The source describes how Americans had been able to see pictures from the war on their televisions at home. It claims that this fact had made Americans more anti-war than anything else. It states that the full brutality of the war can bee seen and that 'blood looks very red on the colour television screen'. This source contains enough evidence to explain why there was an anti-war movement. The sources show how the young American soldiers were more likely to be killed in the first six months than at any other time. The sources also show how the war was seen as more of a reality to ordinary Americans as they were able to see coverage from Vietnam on their televisions and read stories and see photographs in their newspapers. The sources show how innocent civilians, including children, were being killed and injured during the war and not just the guerrillas. In my opinion, there is sufficient evidence in sources A to F to explain why there was an anti-war movement in the United States during the late 1960's and early 1970's. ...read more.