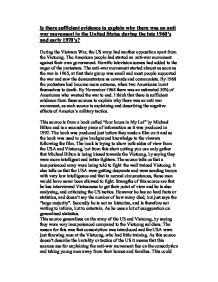 Is there sufficient evidence to explain why there was an anti war movement in the United States during the late 1960's and early 1970's? During the Vietnam War, the US army had another opposition apart from the Vietcong.

Is there sufficient evidence to explain why there was an anti war movement in the United States during the late 1960's and early 1970's? During the Vietnam War, the US army had another opposition apart from the Vietcong. The American people had started an anti-war movement against their own government. Horrific television scenes had added to the anger of the protesters. The anti-war movement started almost as soon as the war in 1965, at first their group was small and most people supported the war and saw the demonstrators as cowards and communists. By 1968 the protesters had become more extreme, when two Americans burnt themselves to death. By November 1968 there was an estimated 30% of Americans who wanted the war to end. I think that there is sufficient evidence from these sources to explain why there was an anti war movement, as each source is explaining and describing the negative effects of America's military tactics. This source is from a book called "four hours in My Lai" by Michael Bilton and is a secondary piece of information as it was produced in 1992. ...read more.

It shows 5 children scared and screaming, while there are three US soldiers behind them, who don't seem to be helping them, as if they don't care. It also shows the brutality of the Americans tactics as they target villages of women and children. Source C is an article written by American journalist Richard Hamer. He is writing about the widespread opposition tot he American presence in Vietnam. It is a primary source and was written in 1970. The purpose of this article was to get people to consider and question America's military methods. This source is quite unreliable as it doesn't give a balanced argument and is one sided. For example he says that the US used napalm, high explosives and destroyed vegetation without warning. He is saying that if the Americans are trying to persuade the Vietnamese people of how evil the Vietcong are and that communism is wrong, the blowing them up is the wrong way to persuade them. He doesn't describe the full extent of the Vietcong brutality and just describes the Americans. This may have been because most newspapers at the time were against the government and would write what the majority of the American people wanted to hear, so they would make more money. ...read more.

The purpose of this source was to express his own and the BBC's opinion on America's way of inhibited television coverage to its public. This is quite a reliable source as it comes from a war correspondent that must have researched all his facts first before broadcasting them. It has also been unedited, as it is a British statement, this also means that it is coming from a point of view, which isn't involved in the war, and therefore there should be no bias. However the British government sponsors the BBC, which are allied and are trying to stay on the good side of America. Therefore even though this statement is unedited, the commentator Robin Day may have been told before hand not to completely slander and criticise the USA. This source is a statement by BBC commentator Robin Day to a seminar of the royal united service institution. This may have caused the anti-war movement because he is expressing his and the BBC's view, which is that the American government is letting the American public watch more coverage of Vietnam than they should be. And that allowing them to watch scenes of war on there colour televisions, is just adding tot he anger of the anti-war movement. ...read more.