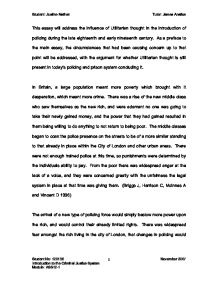 Is Utilitarian field of thought still present in todays policing

This essay will address the influence of Utilitarian thought in the introduction of policing during the late eighteenth and early nineteenth century. As a preface to the main essay, the circumstances that had been causing concern up to that point will be addressed, with the argument for whether Utilitarian thought is still present in today's policing and prison system concluding it. In Britain, a large population meant more poverty which brought with it desperation, which meant more crime. There was a rise of the new middle class who saw themselves as the new rich, and were adamant no one was going to take their newly gained money, and the power that they had gained resulted in them being willing to do anything to not return to being poor. The middle classes began to coax the police presence on the streets to be of a more similar standing to that already in place within the City of London and other urban areas. There were not enough trained police at this time, so punishments were determined by the individuals ability to pay. From the poor there was widespread anger at the lack of a voice, and they were concerned greatly with the unfairness the legal system in place at that time was giving them. ...read more.

Up until now the death penalty was controlling the criminal by the nature of the punishment but was allowing no room for reform from the criminal. (Briggs J, Harrison C, McInnes A and Vincent D 1996) The Utilitarian school of thought would work for both the Government and the population as a whole. It was a functional and effective way of policing. The good of the many had to outweigh the good of the individual. The individual had to be educated into believing that it was in their best interests not to commit crime, and the introduction of a trained force that could earn respect from the individual rather than disapproval was the best way forward. The Utilitarian influence on the Government was evident at this time. Bentham pointed out in his "Introduction to the Principles of Morals & Legislation" published in 1789 that there should be a fundamental review of use of prisons for sentencing, as opposed to more crimes getting the death penalty, as "all punishment is an evil, which under the theory of utility should be administered only when it promises to exclude some even greater evil" (Briggs J, Harrison C, McInnes A and Vincent D 1996 p168). ...read more.

However, a difficulty arose with the Open Days when mainly middle classes visited which resulted in offending patterns not altering. In 1863 a new set of policies were introduced involving longer periods of isolation, longer work periods and exercise for the offender to undertake during their stay in prison. It could be argued that today as prison is intended for reform, the punishment fitting the crime, there is in place a respected police force upholding the law, policing is benefiting society as a whole and its intention is in educating individuals into not wanting to commit crime, that these are the Utilitarian thoughts being firmly in place. In conclusion, the Utilitarians had set out to influence the introduction of an "effective, efficient, functional, practical, sensible, serviceable and useful" policing system to Britain in the late eighteenth and early nineteenth century. (The Concise Oxford Dictionary definition of Utilitarianism). By the nineteenth century, there was strong Utilitarian influence guiding many of the new policies, not punishing offenders, but encouraging their reformation, which has been carried through into the modern day policing and prison system. Total words = 1160 Student: Justine Nathan Tutor: James Anstice 1 Student No: 120136 November 2007 Introduction to the Criminal Justice System Module: ASS12-1 Student: Justine Nathan Tutor: Chris Crooks Level 2 - Counselling Skills November 2007 ...read more.