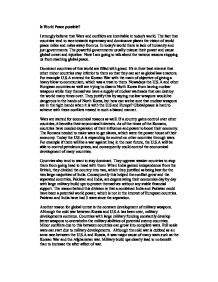 Is World Peace possible? I strongly believe that Wars and conflicts are inevitable in today's world. The fact that countries tend to race towards supremacy and dominance places the vision of world peace miles and miles away from us. In today's world there is lack of humanity and just governments. The powerful governments usually misuse their power and cause global unrest and injustice. Now I am going to talk about the various reasons stopping us from reaching global peace. Dominant countries of this world are filled with greed. It's in their best interest that other minor countries stay inferior to them so that they can act as global law enactors. For example U.S.A entered the Korean War with the main of objective of giving a heavy blow to communism, which was a treat to them. ...read more.

Today the U.S.A is expanding its control on other countries through wars. For example if there will be a war against Iraq in the near future, the U.S.A will be able to control petroleum prices, and consequently could control the economical development of many countries. Countries also tend to want to stay dominant. They oppress weaker countries to stop them from going head to head with them. When India gained independence from the British, they divided the country into two, which they justified as being best for the two large majorities of India. Consequently this helped the conflict grow and the separated countries, Pakistan and India, are degenerating their economies day by day with large military build ups to protect themselves without any stable financial support. The reason behind this division is that a combined India and Pakistan could have been a potential world power, which is not in the interest of European countries. ...read more.

Some people may say that world peace is possible as long as differences between countries are abolished and the world countries focus on economical development without any need for taking arms. I think that this can only be accomplished if the countries accept one political system, if they accept one leader, if they abolish all military development programs, if they abolish economical interests and if they accept one ideology. As you can see when it comes to world peace there are a lot of "ifs". These things are humanly impossible since no country would like to be dominated in any way by another country and is ready to give up its existing power. As we have seen having a peaceful world today is virtually impossible. Conflicts and wars come and go constantly and mercilessly and it is very disheartening to see that world peace is not possible in near future. Infact it's a mere myth. ...read more.