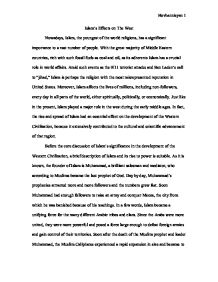 Islam's Effect on the West

Islam's Effects on The West Nowadays, Islam, the youngest of the world religions, has a significant importance to a vast number of people. With the great majority of Middle Eastern countries, rich with such fossil fuels as coal and oil, as its adherents Islam has a crucial role in world affairs. Amid such events as the 9/11 terrorist attacks and Ben Laden's call to "jihad," Islam is perhaps the religion with the most misrepresented reputation in United States. Moreover, Islam affects the lives of millions, including non-followers, every day in all parts of the world, either spiritually, politically, or economically. Just like in the present, Islam played a major role in the west during the early middle ages. In fact, the rise and spread of Islam had an essential effect on the development of the Western Civilization, because it extensively contributed to the cultural and scientific advancement of that region. ...read more.

Al-Khwarizmi made great discoveries in almost all math related subjects. Even the word algebra is the Latin version or translation of the Arabic word Al-jabr from the title of his book Al-jabr wa'l Muqabalah. Moreover, according to an entry from the website Muslim Media Network by Syed Aslam, "Al-Khwarizmi developed the concept of the algorithm in mathematics and for this reason he is called the grandfather of computer science by some people. [Additionally] the word 'algorithm' came from Latin corruptions of his name from Al-Khwarizmi to Algorisms." Also, Muslim mathematicians made noteworthy breakthroughs in such subfields of math as geometry, arithmetic, calculus, and trigonometry. For an instance, the concepts of sine, cosine, and the first tablets of tangents in trigonometry that are so hard to grasp by some were introduced by Muslims. Shortly, it is because of the rise and spread of Islam that all of this vital knowledge was shared with all the different cultures in the west; indeed, a greater understanding of math had and still continues to have a decisive effect on the development of the western society. ...read more.

In contrast, some proponents of Christianity might argue that Muslim achievements did not play a crucial role in the development of the west, since Christianity is the prevailing religion in that area and thus had a much more important role on its advancement. Of course, Christianity is the dominant religion in the west and had great impact on western culture as well; however, the accomplishments of the Muslim world and their effects in the west cannot be disregarded. The improvements in the sciences by Muslims discussed previously are merely a few of the contributions made by Muslim people in the west. In brief, the rise and spread of Islam had a decisive effect on the development of western civilization. The major progressions in such subjects as mathematics, medicine, chemistry and many more by Muslim researchers and scholars had a grand impact on the history of human kind. Lastly, the effect of all of the discoveries made by Muslims during the middle ages are part of today's daily life and are easily noticeable everywhere. ?? ?? ?? ?? Hovhannisyan 1 ...read more.