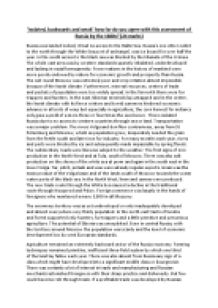 Isolated, backwards and weak how far do you agree with this assessment of Russia by the 1680s?

﻿?Isolated, backwards and weak? how far do you agree with this assessment of Russia by the 1680s? (24 marks) Russia was landed locked; it had no access to the Baltic Sea. Russia?s one other outlet to the north through the White Sea port of archangel, was ice bound for over half the year. In the south access to the black sea was blocked by the khanate of the Crimea. The whole vast area was by western standards sparsely inhabited, underdeveloped and lacking in racial homogeneity. Fewer nations in the history of mankind were more poorly endowed by nature for economic growth and prosperity than Russia. The soil round Moscow was extremely poor and crop rotation almost impossible because of the harsh climate. Furthermore, mineral resources, centres of trade and pockets of population were too widely spread. In the far north there were fur trappers and hunters. In the east, Siberian minerals lay untapped and in the centre, the harsh climate with its fierce winters and torrid summers hindered economic advance in all sorts of ways but especially in agriculture; the corn harvest for instance only gave a yield of a mere three or four times the seed sown. ...read more.

There was certainly a lot of interest in trade and manufacturing and Russian merchants astonished foreigners with their sharp practice and dishonesty. But few could become rich through trade. If a profitable trade was developed by Russian entrepreneurs the tsars eager for more revenue would declare it a royal monopoly. There was plenty of activity in manufacturing. When peter was born in 1672 20 small private and state owned iron foundries existed in Russia. It Russia was to address its economic and technological backwardness a truly enormous amount of work remained to be done. Russia faced many economic problems and to some extent this was a matter of geography. Great distances and an extreme continental climate with severe winters, burning summers and a shorter growing season for crops than in western Europe were in themselves barriers to economic progress. For each grain of wheat or rye sown only three or four were harvested; this was far lower than the standard yield in the more advanced areas of Western Europe. Such a scanty yield meant that the overwhelming majority of the population had to work the ground if any kind of organised society were to survive. ...read more.

Russia?s merchants had travelled and traded abroad at least in Sweden, Livonia and Denmark, since the 16th century. Russia was unable to achieve all it wanted to do so in foreign policy. The traditions of Russian external relations were, however, until the last decades of the century, much more anti-polish and anti-Swedish than anti-Turkish. Ottoman dominance of the black sea littoral was not resented as a bridling of Russia?s economic development and a seizure of territory formerly Russian in the way that Swedish possession of Ingria and Livonia was. By 1686 Russia was a partner in a great anti-Turkish alliance and in 1687 and 1689 it made unsuccessful efforts to invade and conquer the Crimea so long a thorn in its flesh. The last quarter of the century in other words made it increasingly clear that Russian expansionist energies would in future be directed in the main either west wards against Sweden in a renewed effort to force an entry to the Baltic, or southwards against the Turks. The assessment of Russia as isolated weak and backward is partly true because Russia wasn?t as developed as Europe at that time, as compared to Russia; Europe was stronger and more developed. But Russia was improving its ideas and trade, as well as its army. ...read more.