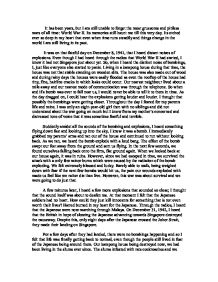 It has been years, but I am still unable to forget the most gruesome and pitiless wars of all time: World War II

It has been years, but I am still unable to forget the most gruesome and pitiless wars of all time: World War II. Its memories still haunt me till this very day. Its etched ever so deep in my heart that even when time runs steadily and things change in the world I am still living in its past. It was on that fateful day on December 8, 1941, that I heard distant noises of explosions. Even though I had heard through the radios that World War II had started, I knew it had not Singapore just about yet. So, when I heard the distinct noise of bombings, I, just like everyone else started to panic. Living in a kampong house during that time, the house was not that stable standing on wooden slits. The house was also made out of wood and during rainy days the houses were easily flooded as even the rooftop of the house had tiny, fine, hairline cracks in which leaks could occur. Our nearest neighbour lived about a mile away and our nearest mode of communication was through the telephone. So when and if a bomb was ever to fall near us, I would never be able to tell it to them in time. ...read more.

She too slowly became ill from malnutrition and the unhygienic conditions we were living in and soon passed away. She passed away only after a month of my father's death. That five letter word "death" ripped my family apart and it was the Japanese who had caused it. How my heart burned with anguish for my parents' death that I felt like murdering those wretched Japanese soldiers who did this to me. This anger overwhelmed me but I could not do anything to suppress it. Killings and war was on the streets just as bombs started showering upon Singapore. I tried to get some sleep but could not. Early down of the very next day, the town was lit up by large klieg lights as an entire tank division came pouring into our tiny island. The rumble of the machines shook the ground beneath me and created a sound so powerful that it seemed as though the earth was splitting into two. I could not take it there in the slums anymore. So, I went in search of my grandmother. I only vaguely remembered where she lived but I decided to give it a shot anyway. During my search for her, it was impossible to find food. ...read more.

During that time I just went around house to house, walked on the streets aimlessly, just to ask, or beg and find for food. The Japanese occupation and its torture lasted for three and a half years. I do not really know how but I had survived it. When the Japanese surrendered to the British on 5 September 1945, it indeed was a very memorable day for Singapore and me. In that year, we went back into the British rule but I could not be any happier than finally being free of the Japanese. On 12 September 1945, a grand victory parade was held at the Padang to mark the surrender of the Japanese troops. I too rejoiced with Singapore on this occasion. I remember the occasion just like it was yesterday. My parents now are not here with me nor is my grandmother but I know that they are still taking care of me from wherever they are. I am now well feed and nourished by my foster family. I still have the book with me that I took as my companion throughout the war. It's still unwritten in but it will always remind me of the past. Now Chinese New Year is nearing and I hope that I would not get lost in the memories of the past. I have to move on and stop living in time's past. ...read more.